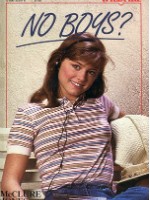 This week, Autostraddle compiled a list of YA novels from the early 80s and 90s with cover art containing some seriously evident lesbian overtones, complemented by columnist Riese’s entertaining art commentary.

In Batgirl #19 Alysia Yeloh, Barbara Gordon’s roommate, divulges that she is a transwoman in an intimate moment between the two characters when Barbara reveals that she is Batgirl, and “[taking] care to distinguish Yeoh’s sexual orientation from her gender identity, Batgirl writer Gail Simone noted that the character is also bisexual.”

Alysia is the first reality-based transgender character to show up in a DC comic book, and whose gender is not a result of “fantasy based methods such as magic, shape-shifting, brain-swapping, and cloning…” often found in independent comics.

Alysia will be “a character, not a public service announcement … being trans is just part of her story. If someone loved her before, and doesn’t love her after, well — that’s a shame, but we can’t let that kind of thinking keep comics in the 1950s forever.”

Woman About Book Club in NYC

Women About, originally founded 1976 by Ellen Dickinson and Jay Slivka, is a volunteer-run organization based in New York City that seeks to “create a forum in which lesbians can meet, participate in communal activities, and share information, interests and ideas in a supportive environment” through their member-generated events.

From nature hikes to walking along the city’s High Line, this group is likely to have an event that everyone can enjoy, and for all the literary lovers based in NYC, there is the Woman About book club:

[…]a group of women who come together one Saturday a month to focus on books written from the perspective of women and shed light on our life experiences. If there is a book, play or series of essays by a particular woman author that you have read and/or wanted to read and discuss with other women, come be a part of this series of lively, thought-provoking discussions.

For more information about the book club, memberships, and forthcoming activities, visit the Women About website or email the organization at info@womenabout.org.

100 Amazing Trans Americans You Should Know

This week the “Trans 100” was released, an inaugural list that recognizes the outstanding work of a diverse group of trans activist, writers, and artists throughout the United States whose inspiring stories have had a powerful and positive impact on the community.

An independent filmmaker in Oakland, the executive director of the only LGBT center in Queens, an advocate for trans students, the first trans reality-television star, trans pioneers, as well as emerging trans voices are all included in the inaugural Trans 100.

The brainchild of We Happy Trans’ Jen Richards and Antonia D’orsay, executive director of This Is How, the Trans 100 represents an effort — which will hopefully be reflected across the LGBT community — to break down implicit (and explicit) transphobia in media coverage by highlighting the diversity of trans Americans. Janet Mock, a noted trans activist and member of this year’s list, declared during her keynote address at the Trans 100 Launch event on March 29 in Chicago, “I am here tonight because of the 99 other names on the inaugural Trans 100 list and the unrecognized thousands who are not on this list whose quiet acts are changing lives.”