What Do You Love About Being Queer?

What Do You Love About Being Queer? 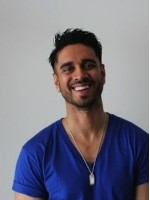 Toronto-based writer, musician and filmmaker Vivek Shraya’s recently published collection of short stories asks one question: What do queers love about being queer? The book began as a short documentary film shot inside Shraya’s own living room in which he queried a diverse range of people whose answers are more than cheerful, triumphant anecdotes—but honest personal statements that may challenge “you to think about your own queerness in ways that might even make you feel a little uncomfortable.” Will Eagle of Fab Magazine continues:

Reading the variety of answers to the question “What do you love about being queer?” underscores the myriad perspective found within our communities, and this is why ‘What I Love About Being Queer’ is worth picking up. We are so rarely exposed to the multitude of experiences in the wider community that it can be easy to forget just how diverse “diverse” really is.

The book is designed with handwritten responses and Polaroid portraits of the various contributors, some of which are now featured on BuzzFeed LGBT along with the documentary film teaser.

In The Nance, Reckoning With Painful Memories

After two years off the stage, Nathan Lane returns to Broadway in The Nance, a play written by two-time Tony Award winner Douglas Carter Beane that tells the story of 1930s gay burlesque performer, Chauncey Miles (Lane), during a time when homosexuality was accepted on the stage and exceedingly dangerous off of it. Chauncey is the star of the show, or the nance—“a flamboyantly effeminate stock character that is all swish, wrist flicks, and double entendres.” Nances were often viewed as comical and played by heterosexual men; however, in this case, the nance is a stereotype of Chauncey’s hidden sexuality, “a source of both pride and self-disgust for the character.”

In a recent article with The New York Times, Lane and Beane discuss how the fear, self-loathing and isolation Chauncey experiences in the play resonates with their own experiences growing up gay in a period when queer visibility was almost nonexistent:

“At school or at home no one used phrases like gay life, gay culture, gay history — what I heard was, ‘I saw this fag on the street’ or ‘This fag was following me,’” Mr. Lane said. “Understanding what love is about, as a gay person, took me a long time.”

Ultimately, though, the play is a love story in Lane’s eyes. It portrays Chauncey’s struggle to accept the love he is offered and to love himself—a story that is still relevant and is likely to touch many.

Previews of the play began on March 21st and opening night is Monday, April 15th at the Lyceum Theatre in New York. Read more about what Beane and Lane had to say and watch a video interview with Lane here. [The New York Times]

Though bullying has proven to be a popular subject in literature over the years, 2012 saw a rapid increase of books centered on the topic, and after the White House’s first prevention conference, “libraries, schools and even major bookstores like Barnes & Nobles” have jumped on board by holding discussion events for parents and children. Larger publishing houses such as Simon & Schuster and Harlequin have incorporated antibullying campaigns to accompany their products as well.

According to The New York Times, this boom mirrors the growing national awareness of bullying—brought on, to a degree, by the often devastating results of cyberbullying made visible through the media. But it has also been viewed as a result of the authors’ own personal experiences. YA writer Megan Kelley Hall who collaborated with Carrie Jones on Dear Bully: 70 Authors Tell Their Stories, a collection of personal essays from several established YA writers, explained:

“A lot of the authors say books saved their lives during those difficult teen years…They know that their fan base is people like them,” she said, “people who consider reading as a refuge. We want to be there for teens to let them know it will get better.”

Gillian Endberg, editor at Booklist magazine, told the New York Times that many authors today have implemented a more “nuanced approach” in their writing, straying from the traditional “right of passage” plots where victims must rise above the cruelty imposed on them. Instead, more and more YA books are beginning to explore not only the psychology of the victims, but also that of the bullies and the bystanders, including adults. Some books even refuse happily-ever-after endings completely, delving deeper into the lasting affects that bullying can have. [The New York Times]

Rainbow Award-winning lesbian authors Karis Walsh (Harmony) and Robin Summers (After the Fall), both published by Bold Strokes Books, converse about their writing processes and the motivations behind their books—from how they balance day jobs with making art to the spark that inspires them to put a pen to paper.

I love the proposal part, coming up with new ideas and starting to see the threads that will connect the characters. You start to have those little epiphanies about who they are and what’s going to happen. But the daily sitting down and writing is difficult for me, and I’m trying to work on that. I don’t have a specific place where I write, but I have certain pens I use, and I have lots of colored index cards and sticky notes. When I finish a scene, I like to rip up my notes and throw them on the floor around me. That way I can see the accomplishment scattered on the ground like confetti from a parade.

The play adaptation Truman Capote’s Breakfast at Tiffany’s premiered this Wednesday on Broadway, and in the words of Vulture and the New York Post: “the show’s producers tried to make the night extra-special by inviting a special celebrity guest: Capote’s ashes,” as Capote had always desired to witness his heroine, Holly Colightly, up on the stage. The ashes themselves, obtained by Joanne Carson (Johny Carson’s ex-wife and a close friend of Capote’s), sadly never made it to the play for security reasons. [Vulture]

'In the Midst of Tribulation' by Mary Griggs
‘Simple Pleasures’ by Kenna White
‘Sagebrush & Lace’ by Sugar Lee Ryder and J.D. Cutler