‘The First Robin of Spring’ by Natalie London

‘The First Robin of Spring’ by Natalie London 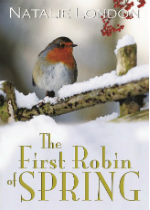 The First Robin of Spring is one of those old-fashioned love stories that is bound to thrill the romantic in all of us. The characters are well-drawn and the narrative flows seamlessly—mystery and intrigue wrapped in a love story. Told in a more “old style” voice, but without the archaic language of love stories of the 70s, the story is packed with the sweetness of budding romance.

The main characters are thirty-something women, both established and somewhat isolated in their lives. When they meet, they are reticent to express their mutual attraction. For all these two women know, they may never see each other again.  However, that theory is soon shattered, when they find themselves members of the same community orchestra that meets and practices at the local university.

Before Julie Burke meets Professor Elisabeth de Gramont, she ends her career at a testing laboratory fraught with operational issues that culminate in a terrible fire, resulting in several deaths. Memories of the fire haunt Julie and so she escapes to a distant college town to live in a home inherited from her late aunt. Because her aunt has left her a sizeable amount of money, Julie no longer needs to work. She is drawn instead to learning more about her aunt’s garden, which leads her to pursue a horticultural degree at the college. Between her classes on campus and her orchestra rehearsals, she finds herself increasingly in the company of the lovely Professor Elisabeth de Gramont. Elisabeth casually invites Julie for coffee, and much to Julie’s delight, the two women begin to establish a relationship. Meanwhile, a mystery materializes in the form of a missing musician.

The missing woman’s sister presses Julie into the position of amateur investigator, and as Julie recovers from the trauma of the fire at her old job, she becomes more self-assured in her new life. Julie acts boldly in the pursuit of information about the missing woman.  But she’s brought up short when the evidence points to someone close to her. To her horror, foul play is indicated. What the clues mean to Julie and her relationship with Professor de Gramont remains to be seen. Maybe all will be revealed before the coming of The First Robin of Spring.

Although the two main characters sometimes lull the reader into thinking that this is just another tranquil romance filled only with the tumult of the early stages of love, the adventure of this tale never fails to surprise the dreamy-eyed romantic. The mystery begs to be solved and is driven by the author’s skillful use of red herrings. London gives us a pleasant diversion as we move along with Elisabeth and Julie and their tentative journey into a relationship. If you’re looking for a pleasant read with a mystery along the way, this is one story to consider adding to your library.

'What Comes Around' by Jameson Currier
'The Fifth Woman' by Nona Caspers
'Hellebore & Rue: Tales of Queer Women and Magic' edited by Joselle Vanderhooft and Catherine Lundof...