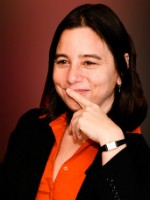 In late January, the Lesbian, Gay, Bisexual and Transgender Community Center in New York refused the Queers Against Israeli Apartheid’s (QAIA) request to rent a space for an event in which Sarah Schulman planned to read from her new book, Israeli/Palestine and the Queer International. The QAIA is “a group that opposes Israeli government policy on Palestine,” and according to Gay City News, has been banned from the center due to “an ‘indefinite moratorium’ on renting to groups that ‘organize around the Israeli-Palestinian conflict.’”

In a recent interview with BuzzFeed LGBT, Schulman—a leading queer activist and author of 18 books—discusses the center’s decision, as well as her views on the Boycott, Divestment, and Sanctions against Israel movement.

The Center has said that it sought to keep the divisive issue out as part of an effort to maintain a “safe space” for Jews and Arabs alike, and LGBT people on all sides of the conflict. But Schulman argued that queer people ought, in particular, to be incensed by Israel’s treatment of the Palestinians. Israel, she said, “pinkwashes” its record by using events like gay pride parades “as signs of modernity.”

“Queer people have not fought for so long to be used by a racist government to justify human rights violations,” she said, adding that “there is a growing Palestinian LGBT movement [whose] goals are: sexual and gender liberation, feminism and an end to the occupation.”

Read the rest of the interview here.

Updated:  As a follow-up to the Gay City article regarding Sarah Schulman and spacial usage at the LGBT Center, we’ve attached a link to the Center’s updated policy, which would no longer prohibits Ms. Schulman from hosting a reading or discussion there under the previously stated conditions.

Last Friday, the 2013 Alice B. Reader Appreciation Awards were announced. Founded by the recently deceased Roberta “Sandy” Sandburg in 2004, the Alice B. Awards honor “writers of lesbian fiction for their contribution to the lesbian community, culture, and identity.” The awards include:

The Alice B. Medal: This award is given annually to living writers who have careers distinguished by consistently well-written stories about lesbians. The award is given once, only, in appreciation of career achievement…

The Lavender Certificate: This award is given to authors early in their career who, in the committee’s opinion, have an outstanding “maiden” novel – or first couple of novels – in print….

Read more about each award, the founder, and the past and present winners here.

Can Writers Retire? Let Us Count the Ways

The recent retirement of author Philip Roth after his lucrative career—“publishing 31 books since he started in 1959”—surprised much of the literary community. This week Bill Morris of The Millions reminisces on a few authors who have chosen to retire “with wildly varying degrees of success” over the years, including Arthur Rimbaud and E.M. Forster.

Writers on Mississippi's Anti-Gay Legislation, Jewelle Gomez on Vampires, and Other LGBT News
Alden Jones Wants You to Be Self-Aware
LaShonda Katrice Barnett on Hot Lesbian Sex Scenes, the Black Press, and Her New Novel 'Jam on the V...