2013 Over the Rainbow List: 84 LGBT Books for Adult Readers

2013 Over the Rainbow List: 84 LGBT Books for Adult Readers 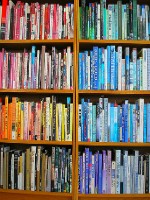 The Gay, Lesbian, Bisexual, and Transgender Round Table of the American Library Association released a list of 84 LGBT books published between July 2011 and December 2012 for adult readers. Authors on this year’s list include: Saeed Jones, Jeanette Winterson, Rae Spoon, Dorothy Allison, John Irving, and Charles Rowan Beye, among many other remarkable voices. Check it out here.

Also this week, the Rainbow Project announced their 2013 list of LGBT books for young adult readers. Works by authors: Ivan E. Coyote, Malinda Lo, Sassafras Lowery, and Radclyffe are featured along with 45 other outstanding writers here.

The Rainbow Book List is a joint project of the Gay, Lesbian, Bisexual, and Transgender Round Table and the Social Responsibilities Round Table of the American Library Association.  The Rainbow Book List presents an annual bibliography of quality books with significant and authentic GLBTQ content, which are recommended for people from birth through eighteen years of age.

The 2013 Stonewall Book Awards were announced, along with the Rainbow and Over the Rainbow lists, at the ALA midwinter meeting in Seattle this January.

This year’s exciting list of winners include authors: Keith Boykin, Jeanette Winterson, Charles Rice-Gonzalez, and Lesléa Newman. Check out the rest of the authors here.

Fantagraphics Books will be reissuing the “critically acclaimed graphic novel” 7 Miles a Second this February, co-written by artists David Wojnarowicz (text), James Romberger (art), and Marguerite Van Cook (color). The book, originally published by Vertigo Comics in 1996, was written during the last years of Wojnarowicz’s life before his AIDS-related death in 1992 and portrays his adolescence hustling in New York’s Lower East Side through his adulthood.

My mind cannot contain all that I see. I keep experiencing this sensation that my skin is too tight; civilization is expanding inside of me. Do you have a room with a better view? I am experiencing the x-ray of civilization. The minimum speed required to break through the earth’s gravitational pull is seven miles a second. Since economic conditions prevent us from gaining access to rockets or spaceships we would have to learn to run awfully fast to achieve escape from where we are all heading.

Anarchy in the Archives: Zine Project Brings Punks of Color to the Academy

The POC Zine Project, founded by queer Chicana media professional Daniela Capistrano, celebrated its three year anniversary this week. The project’s mission is to celebrate, distribute, and share zines by people of color through “curating traveling zine exhibitions, establishing an archive of zines by people of color, and providing grants, tools and events to POC zinesters.” Learn more here. [ColorLines]