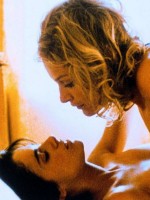 I remember this moment when I was much younger, about eight or nine, at my grandma’s house. We were watching a movie with a woman singing in a bright blue dress made of tiny blue sequins. Her hair was brushed back, smooth like caramel, and I remember thinking that she was very pretty. A crowd stood around her and stared at the stage. Smoked curled between their lips. Then the woman began to sway her hips, and I got this feeling. It felt wrong. Guilt mixed with fear or shame, for liking it, for wanting to watch.

My grandma laughed and said, “Why not?”

Forget ghosts and goblins, three-eyed monsters, the crazy guy with the pumpkin head—no, as a little girl, I was afraid of sexy women. They exposed something about myself that I couldn’t control or understand. It was something I’d never seen in books or films or learned about in school or discussed beyond one Passover celebration at my aunt’s where I’d asked two grown-ups if they were twins, and a cousin whispered in my ear, “No, Paige. They’re lesbians—you know, like, they have sex.”

It wasn’t until twelve years later, splayed across my college bed, scrolling through a webpage titled Top 20 Lesbian Flicks, that I came across director Donna Deitch’s film Desert Hearts—an adaptation of Jane Rule’s novel Desert of the Heart. It would be nice to say, at that point in my life, I’d overcome my fear of women. But I hadn’t. My first girlfriend had recently dumped me and for weeks I’d been walking around in a haze. I was worried, constantly worried. I had relied on her to validate me. The few people close to me whom I had already come out to had not received it very well and told me it was not okay, but as long as I had a girlfriend who loved me regardless, my sexuality remained acceptable. Now that we had broken up, I was forced to confront myself alone. I came to realize that it wasn’t sexy women I was afraid of. My attraction to them and what that attraction meant is what frightened me.

When I think back to the first hour of Desert Hearts, the sensation I can most recall is awe mixed with confusion. I was used to The L-Word in which most scenes felt dramatized and lesbians were rich artists who fell into each other’s beds. Similarly, Bound, in which the lesbians were so badass, they wore leather jackets and had secret fiery sex. In my mind, lesbians were invulnerable women who were out and proud, fearless and confident. They drank whiskey on the rocks, winked at you across the bar—and if anyone had a problem with the way they were, they screamed, “Fuck you,” and rolled off in their corvettes. I wasn’t like those women. Being gay wasn’t glamorous. It was scary, and for me, it meant living in a state of stomach-twisting anxiety and loneliness.

Desert Hearts introduced me to a different kind of story. No characters carried guns or rimmed their eyes in chalky black. Instead, the film followed two vulnerable women who fall in love and develop a relationship that is just as flawed as the protagonists themselves, and upsets many of the people surrounding them. It didn’t matter that the film took place in 1959, a time when I didn’t yet exist. I recognized Vivian, the college professor who’d been unhappily married to a man for most of her career. I recognized the way she repressed her sexuality because I had done the same thing through many of my college years. When Vivian met Cay, a free-spirited flirt who floats from one woman to the next, I recognized her ambivalence, her anxious smiles and not-so-subtle sideway stares, her secret fascination with Cay because I had had those same fascinations. When Cay’s surrogate mother, Frances, kicked Vivian off their Reno ranch for staying out all night with Cay—a night when they didn’t even have sex—I recognized the potential danger in being queer, how it could isolate you from the world without the knowledge or support of a larger community.

There was also the underlying sexual tension, present in both the book and the film, portrayed in a way that I had never seen in lesbian narratives. The film was told through a series of scenes that showed the women alone and together: at work, at home, confiding in their closest friends, drinking at a local bar, walking horses through the ranch. I kept expecting them to flirt or fondle, but instead, they joked around and talked about their ambitions or pasts. They were each developed as a full, three-dimensional person with habits and needs not revolving around the other. There was sexual tension between them, but that tension was only one element of their relationship.

The women didn’t actually sleep together until the very end of Deitch’s film. In the scene, Cay visits Vivian in her hotel room after Vivian has been kicked off the ranch for staying out all night with Cay. Following a long discussion of who kissed who that night, Vivian goes into a state of denial, claiming that it was all innocent and friendly, that she lives a life of order, and feels humiliated—all this while Cay listens quietly, looking amused. Vivian strides into the bathroom to pour herself a glass of water, and when she re-enters the bedroom Cay is naked on the bed. The sheets cover everything but her breasts.

Seeing the expression on Vivian’s face, shock paired with want and confusion, I remembered my first time sleeping with a woman, my newly ex-girlfriend. I remembered the way my hands shook as she undressed.

“I wouldn’t know what to do,” Vivian says.

Yes, I thought, exactly. I hadn’t known what to do either. It was the first time I’d allowed myself to really look at a woman. But I remembered looking without shame or guilt because I’d trusted her and she was there, telling me it was okay.

“So take your hands out of your pockets and come here,” Cay says.

The sex in Desert Hearts is slow and awkward. Yes, they are beautiful, sexy and naked, but they are also overwhelmed and self-conscious. They are just as vulnerable as they are excited because, in a way, it is a first time for both of them. The scene is filled with extreme close-ups. I could literally see the sweat gathered on their arms and backs. The director forced me to look directly at the women the same way that I once looked at my girlfriend, only this time there was no one there telling me it was okay and I allowed myself to look without fear of a consequence. When I watched that day, I wasn’t frightened. I observed the curves of their shins and thighs, the damp hairs on backs of their necks. I didn’t cringe or close my eyes when Cay’s tongue circled Vivian’s breast. When I watched, I saw so much more than sexualized lesbians. I saw people who had desires and fears that I could identify with, and at the time, I needed to know that those people really did exist.

Looking back, it seems very naïve that just four years ago, Desert Hearts was the first narrative—and only narrative, as far as I was concerned—that depicted two ordinary lesbian characters. Four years ago, I had never read lesbian literature. Never heard of Jane Rule, not even Rita Mae Brown. Dorothy Allison, Jeanette Winterson, and Eileen Myles were not authors whom I knew to look for on the bookstore shelves. Later I would go on to discover these authors, to connect and identify with their words. Today their stories are a powerful reminder that I am in no way alone. But Desert Hearts introduced me to a type of narrative that was layered and honest. I loved it for that, for the way it made me take a second look at my behavior, as well as myself.  It showed me things that I didn’t like, but it also showed me wonderful things. Maybe that’s what the best art does. I watched that day and felt recognized.

This year, I read Jane Rule’s Desert of the Heart and found it just as masterful as the film. The book is remarkable for many reasons, but especially for its discussion of female homosexuality during a time when the majority of lesbian fiction was published in pulp paperbacks, and when there was still that lingering idealism of the bread and butter life with the working husband and the apron-wearing wife—not much different than the ideals of my own childhood neighborhood. Rule’s book goes to great lengths to place the reader deep inside each character’s head and discusses class, sex, motherhood, and sexuality in engaging, yet subtly poignant ways. The book, like the film, was one of the first stories of its kind to portray two women who end up in a happy, fulfilling relationship.

One of the things that interested me over the years was that the first fan mail I had was almost always from people who felt very isolated and very unknown and were reaching out to me as somebody who might understand them. But often [they] were very sad and very frightened and very depressed. As the years went on, I much more often got rather joyful letters saying thank you for all the work you’ve done and how much easier you’ve made my life…which is encouraging.

The beautiful thing about reading a book or watching a film is discovering that you are never alone.  That other people share your experiences, emotions, and even your private thoughts. I never wrote Jane Rule a letter, and sadly it is too late now, but regardless, I say thank you.