A Year-long Celebration of Remarkable Women

A Year-long Celebration of Remarkable Women 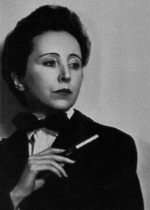 Artists Lisa Congdon and Maria Popova celebrate remarkable women —“beloved artists, writers, and scientists, as well as notable unsung heroes…who have changed the way we define ourselves as a culture and live our lives as individuals of any gender”— through their year-long illustrator/writer collaboration, The Reconstructionists: A Year-Long Celebration of Remarkable Women.

Every Monday in 2013, we’ll be publishing an illustrated portrait of one such trailblazing woman, along with a hand-lettered quote that captures her spirit and a short micro-essay about her life and legacy. ..women who have reconstructed, in ways big and small, famous and infamous, timeless and timely, our understanding of ourselves, the world, and our place in it.

Fiona Shaw to Star in ‘The Testament of Mary’ on Broadway

Colm Toibin’s recently released book, The Testament of Mary, has been adapted into a Broadway play with award-winning actress Fiona Shaw starring as the Virgin Mary.

“…this Mary is also not the aloof, blue-veiled icon that you are offered in statuary,” Ms. Shaw continued. “She is a mother whose son is rather difficult, and she is a mother facing the fact that she produced a special child. The audience has to decide if Mary is a reliable witness to her own memory. She certainly remembers things differently from how we’ve read them.”

The play will begin preview performances on March 26 at the Walter Kerr Theater and is planned to open on April 22.

Many of us are familiar with the New Yorker’s “20 Under 40,” an annual list of prominent young fiction writers to watch out for—but as we have all witnessed over the past few years, the literary world is changing, and fast. Young writers beware: The American Reader is upping the ante. Just this week they released the satirical “10 Under 10,” a compilation of ten “emerging writers” under the age of ten years old, as well as a short interview with each author. Read more here.

The Lonestar Lesfic Festival is an annual celebration of lesbian fiction that offers readers the opportunity to interact with their favorite authors through panel discussions, workshops, book signings, and Q&A sessions. This year’s festival will run from Friday to Saturday, April 5-6 in Austin, Texas. Learn more here.