The Banal and the Profane: Mia McKenzie

The Banal and the Profane: Mia McKenzie

“I should be writing, but there are distractions. Not just the usual ones, such as Netflix and Facebook. Today’s distractions are bigger than that, and so much harder to push away. Relationship Drama.”

This month’s  “Banal and Profane” column comes to us from writer Mia McKenzie.

Mia McKenzie studied writing at the University of Pittsburgh. She is a smart, scrappy Philadelphian with a deep love of vegan pomegranate ice cream and fake fur collars. She is a black feminist and a freaking queer, facts that are often reflected in her writings. Her first novel, The Summer We Got Free, debuted last fall.

She has a short story forthcoming in The Kenyon Review (Spring 2013). Her work has been recommended by The Root, Colorlines, Feministing, Angry Asian Man, and Crunk Feminist Collective. She is a nerd and the creator of Black Girl Dangerous, a multi-faceted forum for the literary and artistic expression of queer and trans* people of color.

I should be writing, but there are distractions. Not just the usual ones, such as Netflix and Facebook. Today’s distractions are bigger than that, and so much harder to push away. Relationship Drama. It’s got me in a headlock and won’t seem to let me go, no matter how desperately I try to wriggle free.

Still, you know what? This story ain’t gonna edit itself.

Right now I’m supposed to be editing a 5,000-word story for a 3,500-word limit in a literary publication that wants to publish it. I have no idea how to accomplish this and time is running short. Lucky for me, I do my best work in a pinch. Well, kind of.

The story I am trying to edit is about a little girl whose mother hangs herself with a clothesline. It’s the first short story I ever finished. It’s won me awards. It’s a good story. Besides suicide, it’s also about other things. Religion. Lost love.

That crazy feeling when you don’t know how to hold on to something that you really, really want to hold on to.

I woke up early to drive my partner to the airport. She travels a lot for work. She could take a cab on her company’s dime, but I like driving her myself. Because I come from a family that hasn’t ever understood the importance of the airport drop-off or pick-up, a family that has always left me to make my way home from the airport on my own, I now have a complex about it. If I love someone, I need to be there when they fly away, there when they fly back. 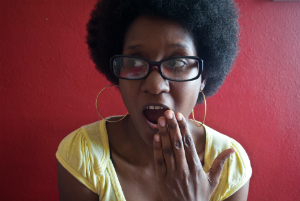 As soon as she’s past security, she’s g-chatting me and I know I’m not going to get any work done today, either, just like I haven’t for the last two days. We g-chat about our future together. We promise to try harder, to do the work that relationships require.

All day I am stuck at home waiting for copies of my new book to arrive so I can ship them to my fans who pre-ordered them. I promised them they’d get them by Christmas so they must be mailed immediately. It’s my first novel. It’s called The Summer We Got Free. It’s already getting rave reviews and I am excited and anxious at the same time.

At some point in the late morning, my partner’s nineteen-year-old knocks on my bedroom door and shows me a note that her younger sister, who is fifteen, left for her. The note says she’s leaving home for a couple of weeks. My partner is now unreachable, but I text her to call me when she lands. When she does, I tell her that the kid has run away. We scramble to find people to help figure out what to do. It’s not the first time the kid has taken off. There’s not much I can do since the kid doesn’t listen to me at all and, in any case, I can’t leave the house until UPS gets here.

When my book finally arrives (after seven freaking o’clock), it’s too late to do anything but head to the airport. I’m going home to Philly for a reading, and to meet a new family member. Since it’s too late for the post office, I have to lug all these damn books to Philly and mail them from there.

My friend, the musician Annah Anti-Palindrome, drives me to SFO. We talk about love relationships. I tell her that I will do everything I can to fix whatever’s gone wrong in my partnership. I tell her that’s what committed people do.

It’s an overnight flight. I prefer these to all other kinds of flights. I like falling asleep and waking up where I’m supposed to be. But it’s freezing cold on this airplane and Virgin America won’t give me a blanket unless I buy a “nap pack.” What the fuck is that about? I shiver all through the night. I get to Philly and, of course, no one meets me at the airport. I schlep home on the bus.

When I get home, there is mouse shit everywhere. I live with my aunt in an old house that used to belong to my grandparents. My room has been empty while I have been travelling a lot of the year and mice have left tiny gross presents everywhere. Merry fucking Christmas. I spend my first hour at home vacuuming. When I’m done, I lie down, flick on the cable TV and zone out. Before I lose consciousness, I realize how being at home feels like safety from the world. Despite the mouse shit.

My partner is trying to get back to Oakland from New Orleans to find her runaway kid. She calls to tell me that she lost her jacket, which had her drivers license in it. She doesn’t know if she can fly without it. I suggest she call the airport. I ask her if she wants me to fly back early. She says I don’t have to. I say I will if I can. Problem is, I always buy the cheapest possible tickets. Changing them costs a fortune. I tell her that even if I can’t come back early, I am here for her and she should lean on me. The rest of the day passes in a blur of cable TV and Facebook.

In the evening, I head over to my sister’s house to meet my new nephew. My sister and I don’t have a good relationship, we haven’t for like a decade and a half, but in the last couple of years it’s been cordial. Mostly, I avoid her and she avoids me. But now there’s this baby. My nephew. A little person who shares some of my genes.

I borrow my aunt’s car and head over. My sister lets me in and gives me a hug at the door. The second I see the baby, I’m in love. He is magnificent. A doughy mass of adorable. For the next hour or so, he is all I think about. I think about who he will be, growing up in West Philly with my family, the same way I did. I want to kidnap him, save him from the confines of patriarchy, the black church, and a hyper-gendered existence. I want to buy him pink things. When he stands on his toes, I say that maybe he will be a ballerina one day. My sister does not respond to that. I silently promise my nephew that when is nine or ten I will take him for a summer and do my best to undo some of the patriarchal damage that will surely have been done to him by then. He smiles when I say that, as if he gets me.

I have a reading today at Wooden Shoe Books on South Street. I sleep late and then go to my sister’s house to see my nephew again. My sister has moved the coffee table so that he and I can get down on the floor together to play. He is only five months old and can’t sit upright on his own yet. I have to hold him so that his disproportionately large head doesn’t tip him over. This means that I am in constant contact with his body, feeling his breathing and his heartbeat. It’s wonderful. My sister chats with me about baby stuff. I marvel at how this is the most we’ve talked in more than fifteen years. Babies are magic like that.

A little later, at Wooden Shoe Books, I read some of my favorite posts from the Black Girl Dangerous blog, as well as the entire first chapter of The Summer We Got Free. The crowd loves it and nearly everyone buys a book. Girls flirt with me and I like it. My friend Jason is there and we go grab a bite together afterwards. We talk about our lives as writers. We talk about our relationships. We talk about a lot of things. Jason is someone I can tell anything to, he is maybe the person I trust most. He is a straight, cis dude and he exists completely outside of my queer bubble. Maybe that’s why I trust him so much. The queer bubble can be a bit much sometimes.

On my way home, my partner texts to ask how the reading went. I tell her it was great. I ask how she is doing. I try to get her to lean on me. She doesn’t. But I keep trying.

I am awakened by a call from my partner. She tells me that she’s still in New Orleans and that the flight she was going to catch early this morning is now uncatchable, because her co-worker took the rental car and crashed it while drunk. This person has the car keys with them in jail. I’m like—what the fuck? The rental car company says she must bring them the car and a key. She has been trying to get out of New Orleans and home since Thursday and she’s super duper stressed by now and I try to comfort her and help her figure out what to do. She is going to have to get a locksmith to make a new key and then try to catch a later flight. I tell her to keep me posted. To call me when she finally gets to the airport. She doesn’t. Hours later, she texts to tell me that she finally made it home.

I spend the rest of the evening eating sandwiches and watching Dexter. Tomorrow I’ll go back to Oakland and try to figure out my life.