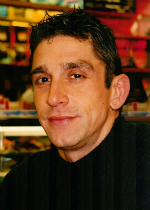 What thrilling news for Richard Blanco and how richly deserving he is of this important recognition, which will no doubt further his already substantial career as a poet. Richard is one of the kindest, most compassionate, and thoughtful people I’ve ever met. He’s also a careful and attentive listener.  We’ve invited him twice as a featured guest to the University of Rhode Island where I teach, most recently this summer as part of our Summer Writing Conference. Everyone who has met Richard in these settings has raved about his dedication, his reading and his presentations.

I first learned of Richard’s work around 1998, when his debut poetry collection, City of a Hundred Fires, won the prestigious Agnes Lynch Starrett Award from the University of Pittsburgh Press—one of a handful of the most recognized first book publication prizes from one of our countries most important poetry presses. Richard’s poem “Mango, Number 61” from that first collection immediately announced a significant and original voice in American poetry. The poem is wonderfully musical in the way it utilizes both English and Spanish phrases. It also illustrates Richard’s interest in numbers and numerology, which is no doubt related to his education and professional work as a civil engineer.  The poem itself garnered many awards, including inclusion in the annual anthology Best American Poetry, 2000, chosen by Robert Bly.

“Mango Number 61” is a well-known and signature poem and I still remember my delight and surprise when I first read it and later when I heard Richard read it.  I immediately wanted to be friends with the person who wrote that poem and now I realize the poem is so emblematic of Richard’s personality. Like him and his best work, the poem is incredibly empathic and full of candor about complex issues of cultural heritage, class, and identity—without any sense of rancor or reductive moralizing. The poem is also a tour de force of code-switching techniques as it moves from one language and linguistic system or code to another, from Spanish to English and back again—whereby the actual sounds of the Spanish lead to his use and recollection of American words and vice versa.

The numerical system explored in the poem number 61, for example, refers to the mango and how an American neighbor didn’t appreciate the many ways Cuban Americans prepare and eat mangos.  No 58, he states, should be the number for Cuban revolución (which began in 1958) though it isn’t, while the number 87—which ends the poem—represents América  (note the Spanish spelling, and accent marks). This use of numerical systems is a fascinating cultural commentary and an original way of puzzling out and talking about how poetry works. The poem starts out by saying “Pescado grande was number 14, while pescado chico, was/ number 12; dinero, money, was number 10.”  And, of course, the subtext that’s activated by switching from one language to another is amazing and wonderfully resonant in all of his work, especially if you understand that pescado grande means big fish and pescado chico means little fish etc. Richard is describing a world where children are struggling to understand their recently emigrated elders and he’s also telling us what it’s like to make poetry—that is, for larger assertions out of the smaller minutia of words, at the level of every letter of the alphabet, every sound, every number, and every syllable. Creativity, here, takes shape at the boundaries of chance, math, and the mystical.

In his beautiful and moving poem “Unspoken Elegy for Tía Cucha” (from his most recent book Looking for the Gulf Motel, 2012) Richard speaks to the premature death of an aunt. Internal rhymes, off rhymes, and sonic links, such as “door” and “manicure”; and “eh” “efficiency” and “Farmacia”; and especially “spoke” and “smoke” are embedded throughout the text and subtly announce his aunt’s impending death, likely from lung cancer or some related malady. Spanish, after all, is derived from the Latin and so many words from the Latin are also used in English just with slightly different inflections and pronunciations. The larger ramifications of this poetic knowledge are significant because it enables Richard to be respectful and welcoming of so many other cultures. Clearly, Richard understands and is skilled at harnessing the real radical power of poetry (radix in Latin) as in the root of poetic language, and its importance for larger American culture. Richard Blanco’s work is extraordinary in its ability to tell a clear and compelling story filled with vivid imagery culled from various cultures, and in the subtle and inimitable way he suggests that no language has primacy over another.

He seems to be telling us we need to be inclusive and compassionate, not dismissive because someone’s accent is different from our own.  What an important message for children and people of all backgrounds to hear during the inauguration.

'I Must Be Living Twice' by Eileen Myles
'Cow' by Susan Hawthorne
Red-framed Glasses and a Gold Star: The Art of Writing Good Fiction

Peter Covino is the author of the poetry collections, The Right Place to Jump (2012) recently featured on NPR and the Huffington Post, and Cut Off the Ears of Winter(2005) both from W. Michigan University Press, New Issues.His prizes include the 2007 PEN American/ Osterweil Award for emerging poets and the Frank O’Hara Poetry Prize for his chapbook, Straight Boyfriend (2001). His co-edited volume, Essays on Italian American Literature and Culture recent appeared from Bordighera Press, CUNY (2012). Peter is an Associate Professor of English and Creative Writing at the University of Rhode Island.