Notes after Fifteen Viewings of ‘The Fifth Element’

Notes after Fifteen Viewings of ‘The Fifth Element’

Never has it come about that I’ve turned down an opportunity to watch The Fifth Element. Surely by now, I have sat through at least fifteen viewings. Quite a feat for me considering that I typically hate re-living films, even ones I enjoy in the moment. The reason is simple; I prefer not to “think” while watching movies. Let me at least in the dark, I ask of my critical self, be dumb and amused and emotional and campy. Let me just enjoy the damn thing.

And so, as I prepare to write about The Fifth Element, I would like for you to know that I’d much rather not write about it. I fear that if I think about it for too long, the whole shimmering structure of my love for this film will crumble to dust. Here, I hold a line from Lydia Davis’s story “Break It Down” before me like a talisman: “…you can kill it too even by thinking about it too much, though you can’t help thinking about it all the time.”

It’s entirely possible that each of the sections of this essay will contradict and cancel one another out. To which I say: Exactly.

Attempting to protect me from being ravaged by pop culture, my mother had a rule. “I don’t care about violence,” she’d say whenever I held up a possible movie rental in the New Releases section of Blockbuster. “But no sex.”

I likely could have saved us both a great deal of frustration by confessing that I was absolutely uninterested in watching straight people have sex, but that’s hindsight.

This was 1997 and the video cassette in my hand was Luc Besson’s The Fifth Element. I remember looking at the advertisement for the film, scanning Milla Jovovich and Bruce Willis’s faces as well as the space ships and constellations whirling in the background.

Instead, though, she was laughing hysterically. And she kept laughing. If I recall, we watched the movie again the following night. When we’d get irritated with each other, sometimes we’d wave each other off and say, “Bzz! Bzz!”

Oh, Ruby Rhod. Garbed in Jean Paul Gaultier’s roses and leopard print, waving his microphone about like a scepter, bickering and mewling and narrating high pitched and at the speed of light, Chris Tucker steals every scene he’s in and I love him for it. Even though I’ve watched the film enough

times to know all of his lines from memory, it’s not uncommon for him to make me laugh so hard I start to cough.

When I was a teenager obsessed with The Fifth Element, I was devoted to the idea that Ruby Rhod was a gay character who gets to take part in saving the universe. Except Ruby isn’t gay. I didn’t know about the phrase “gender bending” at the time and had no schema for an effeminate male character who has sex with more women in the film than the macho protagonist. Ruby was a kind of man I thought would only be possible light years into the future: funny, black, attractive, fierce and – most importantly – alive by the end of the movie. 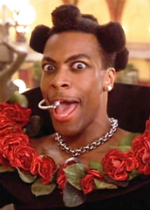 Ruby Rhod troubles me. He explodes into the narrative, black, loud, and out of nowhere. Like the standard Magical Negro, he is functional in service of the film’s white heroes but has little to no story of his own. We know nothing about him except that he’s hilarious, really loud, and sexually promiscuous. When you set aside his costume choices, he’s really not that different from most black comic characters. In fact, he’s almost offensive.

I’d rather not think about it.

“Camp taste is, above all, a mode of enjoyment, of appreciation – not judgment. Camp is generous. It wants to enjoy.” – Susan Sontag

Meanwhile, something black and unacceptable is lodged in the universe’s throat. It’s not a planet exactly. It does things that planets, at least planets like our own, cannot do. It makes phone calls, for example.

When this mysterious, black entity calls Zorg (Gary Oldman), we can’t understand its language, only its menace. When the villain puts the phone back on the receiver, a thread of blackness seeps down his forehead like blood from an intellectual gunshot.

The black thing has an appetite. The military fires the most powerful nuclear missiles in its arsenal at the black thing and the blackness expands, swallows the warships whole, and keeps expanding. It grows every time it is fired upon.

Though the name isn’t mentioned in the film itself, Luc Besson named this entity Mr. Black.

I suppose we should take comfort in knowing that a black man will eventually become president of the universe, but that’s neither here nor there.

Let’s have a moment for Diva Plavalaguna or, as she’s most often referred to, the Blue Alien Opera Diva. Everything about her scene electrifies me. The futuristic remix of the Mad Scene from Lucia di Lammermoor is brilliant, as is the way Luc Besson splices the diva’s performance with Leelo’s fight sequence. The diva has as much control over her audience as Leelo does over the group of aliens she’s fighting. They were made for this moment.

This scene ends with Leelo hiding in an air conditioning duct, curled in the fetal position, crying. I suppose being shot at by a machine gun is a bit stressful but her sudden shift from fighting off twenty aliens at once to crying and screaming for help is a bit odd.

It’s more than a bit odd actually. I’m inclined to think it’s a narrative compromise. A science fiction film can have a strong female heroine but only if she’s incredibly vulnerable. She needs a man; she needs love. As indicated by the film’s climax, she literally can’t function without it.

The first time we see Leelo, she’s literally an object created by a room full of male scientists. While she’s seemingly unconscious, the General tries to take a picture of her nearly naked body “for the archives.”

Her physical perfection is highlighted by her now iconic bandage costume and reiterated not once, but twice when she strips down in front of male characters in service of more jokes about her being “perfect.”

When asked by Entertainment Weekly about the experience of wearing such revealing costumes on set, Milla Jovovich noted, “In the fashion world, most of the guys are gay and they have the etiquette not to notice. But these English guys working on the set were whistling and stuff.”

I suppose there are certainly more problematic films that I could have chosen to fall unabashedly in love with. Of course, that’s little comfort. I’m essentially saying that sometimes I want to look the other way, to pretend cultural oppression and enforcement aren’t an integral part of mainstream film.

But damn it: I love this film. The future as Luc Besson presents it is as colorful as I could hope for and bedecked in clothes by Jean Paul Gaultier and it has flying cars and gender-bending black people and black presidents and orange-haired action heroines who love fried chicken and save the world.

Again, though, let’s not talk about it.

'The Asylum' by Simon Doonan
The Banal and the Profane: Michael Broder
Zinesters Do It on the Photocopier: A Look at the Queer Zine Archive Project

Saeed Jones recently received his MFA in Creative Writing at Rutgers University - Newark. He earned his bachelor's degree at Western Kentucky University where he won the Jim Wayne Miller Award for Poetry. While at Western, he was the poetry editor for Rise Over Run Magazine. He currently teaches in Newark, NJ and is a regular contributor to Union Station Magazine. His poetry has appeared or is forthcoming in publications like StorySouth, Barnwood Magazine, Splinter Generation, The Adirondack Review, Ganymede, and Mary. His blog, For Southern Boys Who Consider Poetry, is dedicated to emerging queer poets of color. You can follow him on twitter @theferocity