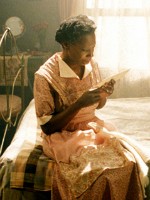 I first saw The Color Purple at the cinema in 1986 and I did not like it. It was too melodramatic for me, particularly the separation scene where Celie is dragged down the porch stairs, holding on to Nettie who is banished, screaming “Why? Why?” I was a teenager on a first date. My date was incredibly moved by it and she cried during a few scenes, while I sat there wishing the film would just mellow out. Some years later, I watched it again on VHS and it instantly became one of my favorite movies. (That “Why? Why?” part still bothers me though.) What was the cause for the two contradicting reactions?

Its grandeur is undeniable. Its powerful story of black life in the early 1900s USA is unparalleled. It was one of the best films of the mid 80s, arguably the best of 1985, famously garnering 11 Oscar Nominations but no wins. And yet The Color Purple is full of flaws, leaving you battered and bruised but elated with the movie’s triumphant tale.

Alice Walker’s novel centers on Celie, a poor, black, ugly woman born into hardship in the South, fathering two children by her “pa” by the time she is 14 years old. It won both the National Book Award and the Pulitzer Prize for fiction. Steven Spielberg, Hollywood’s blockbuster genius at the time—responsible at that point for Jaws, two Indiana Jones movies and E.T.—filmed the adaptation. It was his first dramatic turn as a director. He was faced with the almost Herculean task of filming such a well loved and respected, intimate book, written as a series of letters to God. It helped that Walker constructed characters that are fascinating, fully formed and relatable. To his credit, his casting choices were brilliant; Danny Glover as Mister, Margaret Avery as Shug, Adolph Ceasar as Old Mister, and the introduction of Whoopi Goldberg as Celie and Oprah Winfrey as Sofia—who own the movie, to the world. His teams for costume design, production design, art design and make-up were stellar, even though some scenes are painted as too idyllic. Special mention goes to Allen Daviau for his luminous cinematography. Spielberg’s detriment, though, is the fact that he had not yet learned, or mastered, the art of subtlety.

Perhaps he was trying to appeal to as broad an audience as possible, and the book’s dark subject matter of abuse, rape and degradation proved too ominous. Too often Spielberg beats you over the head with the emotion, painting with too wide a brush, and then overcompensates with treacly sentimentality and comic relief. These moments are unnecessary and distracting, minimizing the intimacy of Walker’s heartfelt story. Yet, in spite of this, Spielberg reels you in and captivates you with another scene, making you forget what you had just uncomfortably seen.

Spielberg changes tone often, but the story is so strong, the actors so compelling and believable, that you don’t usually notice the juxtaposition of moods. How much of that was the writer, how much the director? Alice Walker had done the initial adaptation, but her script—which allegedly did not downplay the love between Shug and Celie—was not used.  One can’t help but wonder how faithful to the novel her script would have been. Menno Meyjes was then brought in to write the screenplay. Some interesting parts were added: a touching kitchen scene where Nettie teaches Celie; a story-line between Shug and her preacher father which culminates in one of the movie’s most memorable and moving scenes; and the expansion of the role of Old Mister, Mister’s father, highlighting the intergenerational interaction and lack of love in Mister’s life from his dad, and how Mister then treated his own son, Harpo. But, crucial parts are ignored: Mister and Celie’s relationship at the end of the book, which denies us the chance to see how Mister transforms and attempts to make amends, and, most glaringly, the extent of the same-sex, love relationship between Celie and Shug. This is a love that endures through so much of the book and is a huge factor in the growth and development of Celie as a determined woman. This love is the impetus for her blossoming and strength. Criminally, it is ignored, or downplayed.

The heavy-handed direction is on display again during the separation scene between a young Celie, played commendably by Desreta Jackson, and Nettie. Later, a fight in a juke joint between two people becomes a fight that includes everybody in the bar.  When has this ever happened in real life?  It’s one of those things that seem to only happen in movies—and it is always stupid and always plays out as fake, and unnecessary. Spielberg stumbles when  he relies too heavily on slapstick comedy: Harpo falling through the roof he is fixing, twice; Miss Millie driving recklessly through the streets, Sofia by her side, with pedestrians leaping out of the way; Miss Millie screeching for her fear of being attacked by black men while not knowing how to drive; Mister burning food and acting forgetful while preparing a meal for Shug. These were a waste of time and change of tone to the detriment of the film. They cheapen the scenes and minimize the drama. That car scene should really be about Sofia. It is the only moment Sofia has had in many years to be part of her family, to meet her children who don’t know her, to lift her heavily squelched spirit. Instead, it becomes a cartoonish escapade about a miserable white woman, the only white character given any real scene, over-acted by Dana Ivey. How could the man who drew such brilliant, often subtle performances out of his leads, direct Ivey to act this way, and not see its silliness in the dailies and final cut?

There are a few inconsistencies in the script, or the filming. One that stood out is the language of Celie’s children, who were born in America and then moved to West Africa as children.They traveled and lived with English-speaking, missionary parents and a guardian, but they don’t speak English. They are not even able to express greetings in English! How were they communicating with their caregivers for all those years?

What does make Spielberg such an exciting, and successful, director is that he is a brilliant storyteller. And he tells them with an abundance of love that is hard to miss and resist. The cinematographer, Daviau understands this well. Aside from a few in-your-face close-ups of Mister that seem to be there to emphasize his power and stature over Celie, too much so, his actors are not mystified or “cooned” like black actors in film usually were. They are well lit, ordinarily, or naturally so, and without segregation. The scene in the juke joint where Shug sings “Sister” to Celie and the scenes with the found-letters bleed with beauty. The soft lighting in the juke joint and the glow from the kerosene lamp on Celie’s table are perfect for the emotions that Goldberg’s face reveals. The humid atmosphere of the bedroom where Celie gets her first letter and the various locations where she reads the letters, in particular the porch scene bathed in sunset-orange, enhance the drama and mood to unforgettable heights.

“It’s about Life, It’s about Love, It’s about Us” went the film’s true-to-form tagline.  The “us” is a universal us, as this is not just a movie, or novel, for people of African descent. Nor is it a movie solely for women. Walker’s story is so damn good, and Spielberg, despite his flaws and inconsistencies, elicits such brilliant performances out of his leads, and shows us the beauty that is found in life amongst all the hardships, that it is impossible not to be unnerved, elated and comforted by The Color Purple.

How Queer Witches Helped Me Come Out
8th Annual Lambda Literary Awards
Gary Indiana: On His New Book 'I Can Give You Anything But Love' and the Impossibility of Happy Endi...