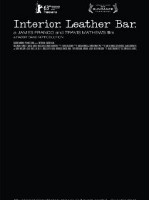 EW interviews James Franco about his recent art film Interior. Leather Bar. set to premiere at the 2013 Sundance Film Festival. The 40 minute gay S&M film was directed by Travis Matthew and Franco himself, and is said to “blur the boundaries between observer and observed, truth and fiction, delight and pain.”

Watch a clip from the film and read the interview here.

Photographer Jill Peters releases a collection of photos capturing the virgjinesha, or “sworn virgins”, of Albania—“biological females who have chosen to live their lives out as men”—which she aims to turn into a documentary film with filmmaking partner Alix Lambert.

In traditional cultures in which our modern notions of gender identity have not become political and social touchstones, trans identity (although not named as such) has been an accepted identity….[The virgjinesha’s] choice often comes at an early age and they “swear” before twelve town elders to a life of “chastity” at which point they go on to assume male identities. As in most patriarchal societies women have very little rights, so as men these virgjineshas can hold property, own guns, smoke, become heads of households and enjoy all the other privileges of being a man. The catch, no sex or marriage.

Check out some of the photos and learn more here. [Velvetpark]

After receiving the prestigious Cecile B. DeMille Lifetime in Cinematic Achievement Award on Sunday night at the Golden Globes, acclaimed actress and director Jodie Foster gave what has been received as a controversial “non-coming-out-coming-out” speech. While some have viewed the speech in a positive light, others have found Foster’s words disappointing. The Week explores this controversy in their article, Why Jodie Foster’s Golden Globes speech may disappoint the gay community, while The Guardian offers a different perspective on the topic here.

Rejection is all a Part of the Game
Full Heart: A Tribute to David Rakoff
Madea's Big Scholarly Roundtable: Perspectives on the Media of Tyler Perry