‘Carrie’: The Horror Classic Gets a Lesbian Reboot

‘Carrie’: The Horror Classic Gets a Lesbian Reboot 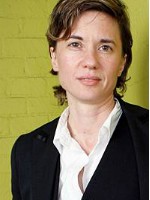 Kimberly Peirce was first recognized as a prominent female director after her groundbreaking debut film Boys Don’t Cry—the story of a transgender man who is murdered in Nebraska—became “the most acclaimed film of 1999.” Now, over a decade later, Peirce graces us with her exciting new film, the second book-to-screen adaptation of Steven King’s 1974 horror novel Carrie, and with a feminist twist.

‘…what does this story mean now, 40 years later?’…Women have had, certainly not enough, but women have had more power. Women’s lib happened. Women’s sexuality is out there. Some people might say it’s a stretch to say it’s a feminist text. But in a lot of ways it is. The central character is a woman, the central relationships are between women — between a mother and a daughter and between a girl and all these other girls…

The film will be released on October 18 and is only one of the many projects Peirce has in the works, along with a butch-femme romantic sex comedy and a story based on her father at the end of his life. [OUT]

‘All We Know: Three Lives’ by Lisa Cohen

Author Lisa Cohen’s recently released biography and nominee for the National Book Critics Circle Award, All We Know, explores the extraordinary lives of three lesbians who lived in Paris during the roaring 1920’s:

Cohen sat down with NPR to discuss her new book and the remarkable women who inspired it. Listen to the interview here.

Barak Obama touched the hearts of many in the LGBT community in his inaugural speech on Monday, being the first president to address the ongoing struggle for gay rights. While Sadie, an 11-year-old transgender girl, was “so proud of President Obama for including the gay community…she felt like the trans community wasn’t included.” This inspired her to write a motivational speech addressing transgender visibility. Read Sadie’s speech here. [HuffingtonPost]

A couple of weeks ago, I was volunteering at Bluestockings Bookstore, alphabetizing the lesbian erotica, when I noticed Carry Brownstein standing by the front desk. Attempting to be nonchalant, I moved over to the Awesome Queer Feminist section (yes, this does exist) and noticed Fred Armisen running his finger down a blue book spine. Turns out the two stars, who “spend a lot of time in a fictional feminist bookstore Called Women & Women First” on their hit TV show Portlandia, were on a shopping spree with New York magazine’s Julie Klausner at Bluestockings—an activist center and feminist bookstore on New York’s Lower East Side. See what made their reading lists here and if you haven’t already visited Bluestockings, I highly recommend checking out their unmatched selection of LGBT books or mingling with their amazing community at one of the store’s nightly events.

Graphic memoir fans will be happy to hear that Flavorwire Books has compiled a list of eight outstanding artists whose work is reminiscent of the indelible Alison Bechdel.

[Photo: Kimberly Peirce; image via OUT]