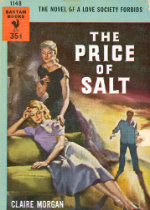 Patricia Highsmith’s darkly sardonic novels have been known to turn out some of the most successful and psychologically thrilling films—Strangers on a Train and The Talented Mr. Ripley, just two among the many.

Fans of the 1950s, lesbian love stories, or road trip movies in general, will be excited to hear that Highsmith’s 1952 lesbian-themed novel The Price of Salt is being adapted into a feature film titled Carol.

Highsmith, who had relationships with both men and women throughout her life, according to her biography, penned The Price of Salt, originally known as just Carol, under the pseudonym Claire Morgan….Highsmith wrote The Price of Salt during the heyday of lesbian pulp novels, but her tale, which is often heartbreaking, varied greatly from the bleak outlook of so many pulp novels,  offering up a glimmer of hope with its “happy ending,” in which she left it open to the chance that the women could end up staying together.

The film was written by Emmy-nominated lesbian playwright Phyllis Nagy and will be starring Cate Blanchett and Mia Wasikowska, with John Crowley set to direct. If all goes well during production this February, we should expect to see the new release in theaters within the next couple of years. Learn more here.