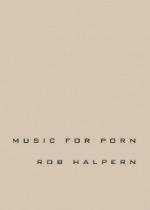 He aligns the soldiers of war, the objects of his lust, to the “fate of bodies constructed by money and the potential disruption of this fantasy.” The striking comparison of the porn industry to the military is further examined in the final section as well (“… the US soldier’s body becomes a perfect pornograph when it’s a dead body casualty of finance, guarantor of my pleasure a body whose image has been legally withheld, removed from public circulation, just as its autopsy report has been classified in order to preserve the values that body died for, values transfigured in the soldier whose hard muscle materializes our common resource, first rendered as sacrifice purity of waste and then withdrawn from view”). In “Imaginary Politics,” Halpern’s poems feel disembodied, as they probe lust and the loss of passion (“a mind without sex, a shudder with no reference”). Throughout, Halpern makes arresting stylistic choices. In some of the poems, I found the italicized final lines to be effective, a sort of funereal effect–as if they are trying to nail a coffin shut. I deeply appreciated the linguistic skill, power and the intensity of Halpern’s book especially in the section entitled “Memoranda.” I dog-eared many pages here, going back to lines I found powerful (“You can put anything inside me, I want to say, anything to amplify these feelings of pity and shame, whatever it takes to help get me off”; “Even the dirt of his humanity adds an inexplicable glow to the national sum, such allure to the skin”).  By chance, before reading Music for Porn, I had read the debut novel The Yellow Birds, a moving, no-bullshit account of a former soldier’s anguish by poet Kevin Powers.  What I believe will stay with me are his and Halpern’s complex insights which capture the many contradictory feelings invoked by war and living within a militarized country.