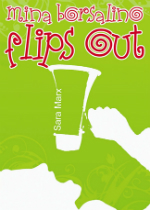 If you’re looking for a heartwarming holiday story, Mina Borsalino Flips Out just might fill the bill.  Although bearing an unlikely title, it really does ring true with grinch-y characters and Christmas wonders to restore the soul of even the most disheartened.

Narcissistic Mina Borsalino is forced to leave her home, her wife, and her job in Hollywood just as the holiday season is about to begin.  Her wife wants a divorce, she’s no longer welcome on the set of the couple’s hit TV show, and her wife’s lawyer has cut off her bank account and credit cards.  What’s a woman like Mina to do?  She heads for the midwestern town Landon, Iowa, where she grew up, and where she vowed never to return.

Landing on her estranged twin’s doorstep, she finds the town and most of its inhabitants in shambles.  Forced to remain in Landon due to her financial disadvantage, she has no choice but to confront her past.  Landon is a foreign land to her, so tarnished is the town by the impact of hard economic times and, much to her consternation, her new experiences begin to open her eyes, and self-absorbed Mina Borsalino begins to understand how truly blessed she is, even in her current circumstances, as she looks through the filter of the hardship ravaged lives of the people she encounters.

When Mina is unabashedly coerced into filling in at the beleaguered Sacred Heart School in Landon as a replacement for her ailing sister, she struggles against a strong desire to flee the scene.  Instead, she reluctantly rolls up her sleeves, trying to give jaded middle-schoolers a sense of power in their powerless lives by engaging them in preparing for Sacred Heart’s last Christmas Pageant before closing its doors.  Soon Mina finds herself thinking more of others than of herself.  Encouraging the kids’ creativity, Mina finds the children beginning to emerge from their pre-teen indifference and downright cynicism to actually become enthusiastic about developing and performing their Christmas musical.  Barriers begin to fall away, and lives all around Mina start to change for the better.

In spite of her best efforts and small progress to unite the community, a financial downward spiral seems to trap Mina in its vortex and she finds herself in a losing battle to save her marriage, her family, and her alma mater.  The clock is ticking and time is running out.  Mina needs more than one Christmas miracle to turn the grim situation around, but it doesn’t seem likely she will succeed.

Mina Borsalino Flips Out is a Christmas Carol-esque offering, but is an entirely original story devoid of specters of Christmas-anything anywhere to be found, except perhaps in characters that are alive and not always so well, or so well-off.  But with each passing day, Mina learns to appreciate herself, her family, the kids she teaches, and finally, more and more of the inhabitants of Landon, in spite of herself.  People she would once have refused to associate with become dear friends, and, as an unlikely intermediary, Mina facilitates the coming together of a town that is divided like pieces of a holiday pie.

Marx has given us a story filled with tragedy and misfortune, but she’s also filled it with resilient kids, clever parents, and Mina’s humorous take on her own hard luck and her new life.  As Sacred Heart limps along toward Christmas on its last legs, Mina has one encounter after another that sets her up for her own Christmas miracle.

Characters are delightful, from the street-wise middle school student, Emmanuel, to the flamboyant high school costume designer, Ricky, who works his miracles with a little fabric, a sewing machine and a lot of ingenuity.  Marx weaves a tale with threads of comedy, making the rough fabric of the situation in the town feel softer against the imagination.

This is a masterful tale of wonder and renewal, perfect for the holiday season.  So, light a fire in the fireplace, turn on the holiday lights and music, pour yourself a cup of hot cocoa, and prepare to journey to a place where miracles can happen, with a holiday treasure that will warm your heart.