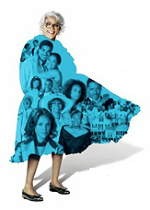 On Wednesday November 28th, the Mary and Leigh Block Museum of Art, held a panel discussion examining the work of African American writer-producer-director-actor, Tyler Perry. The featured panelists—academics specializing in the areas of African American Studies, Media Culture, Film/TV, and Gender Studies—considered “Perry’s extensive body of work from a variety of perspectives, exploring such topics as his theatrical roots, his works’ connection to ‘the’ African American church, the highbrow/lowbrow tensions his works stirs up, and the ways that class region, gender and sexuality signify in his screen and stage productions…”

In this engaging article, writer Nathan Rabin of the A.V. Club, gives an elaborate overview of the panel discussion that followed the viewing of Perry’s work.

Perry has an unparalleled gift for crafting narratives that resonate with his core audience. That extends to his own story, a Horatio Alger-like tale that catapulted him from a sexually abused, homeless high-school dropout to the pinnacle of wealth, fame, and achievement. Perry attributes his success to God’s intervention. By walking in faith, Perry went from the lowest of the low to the highest of the high. That faith is the cornerstone of both his films and his massive commercial success, but the interpretation of faith his films have offered again and again keep him attached to a regressive take on gender, sexuality, and family—and suspended in a state of seemingly permanent creative stasis.

Lesbian poet, Eloise Klein Healy, has been selected to be L.A.’s first poet laureate. Healey is 69 years old and has long been involved in the L.A. arts community, particularly the 1970s feminist movement. Much of her work is centered on the city of Los Angeles, as well as her personal experiences with sexuality.

From the Los Angeles Times:

She writes lovingly of helicopters and bougainvillea, of strip malls and Santa Anas. Car thefts and stabbings are part of the backdrop. Freeways wind freely through her verse…Her “lesbian feminist” poems are deeply personal…but still accessible for a wide audience.

Learn more about Healy’s time spent in the Midwest and Los Angeles, along with her future plans as poet laureate here.

Why are Woman Writers Still Stuck Behind Pseudonyms?

The Hunger Games, Twilight, and Harry Potter have proven to be some of the most successful books in contemporary genre fiction, and though each text was written by a woman, many female authors of sci-fi and fantasy novels “are still being urged to use male pseudonyms to avoid turning off male readers…”

The idea that women can only write about and for women, while men are masters of their castles and the world beyond, both on the page and off it, is a relic of an earlier era. Rather than coddling male readers and protecting them from the knowledge that they might be consuming the female perspective, maybe it’s time for publishers to treat their readers like adults—and to spend some of those marketing budgets to reset their male readers’ expectations.