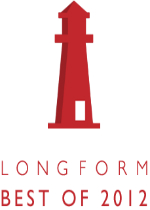 This week Slate Magazine compiled a list of their favorite articles from 2012—including picks in sports, politics, media, interviews, science, and of course, sex.

Articles range from “Absolute Beginners” (“Eight women remember their first times”—queer authors Miranda July and Krista Burton among them.) to “Please Don’t Infect Me, I’m Sorry “(“Sex and status disclosure in the age of Grindr and undetectable HIV-levels.”) to “The Ayatollah Under the Bed(sheets)” (“Politics, sex, and political sex in Iran.”).

Check out these articles, along with the rest of the list here.

And, while we’re on the topic of sex, I recently queried a series of writers on their personal approaches to  tackling sex in their own writing—answers by 2010 Lambda Literary Emerging Voices Fellow Liz Green, contributor Amy Gall, and Lambda Literary Managing Editor William Johnson are featured. Check out their answers here.

Anna Anthropy, an independent video game developer, shares the experience of transitioning through what has been referred to as an “interactive memoir“.

In a recent interview with SF Weekly Anthropy stated:

Games have a capacity for empathy that other art forms don’t because the audience is actually performing the art. Hormone replacement therapy was, for me, an experience of constant frustration. I can’t think of a form better suited to conveying frustration than the videogame. And people told me they got it — I remember one of the first comments I read was, “If this was a blog post I wouldn’t have read it; if this was a video I wouldn’t have watched the whole thing, but because this was a game I played it until the end.”

In response to the protest against his play Corpus Christi this past October, Terrence McNally  discusses his thoughts on religion, sexuality, his visions for the play and his reactions to the violence in Greece with Out Magazine’s Ioannis Pappos.

Even more important than being a good artist is being honest. Not to live a secret life. That’s the only way I can be an authentic person. God is in all of us. God has a gay gene, too. I’m 74, and I’ve been fought a lot, and I’ve been thanked a lot. At some point, the mayor had to step in and protect my life. He had someone walk me to the subway. We had AIDS funerals while people protested against homosexuality in the background…

Read more of what McNally had to say here.

Read This! A Chilling and Atmospheric Tale of Queer Desire
August's Most Anticipated LGBTQIA+ Literature
Erin Belieu: The VIDA Count and Women in Publishing