‘The Foundling Wheel’ by Blas Falconer

‘The Foundling Wheel’ by Blas Falconer 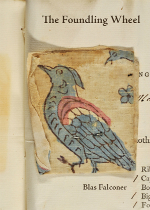 The Foundling Wheel (Four Way Books) is an apt title for this collection of poems, which reflect the revolving emotions involved in cleaving to one’s child or lover, as well as the emotions involved in being emotionally and physically abandoned. Many of these poems touch upon the relationships between two gay fathers and their infant son.  There is a sense of absence in this work and a resistance to “taking comfort/in routine,” meaning domestic routines and the semi-rural landscape behind most of these poems.  Certain darker emotions reverberate under the surface—anger, resentment and in short, the panoply of emotion that come with any relationship, gay or straight.

As a follow-up to his first collection of poems, A Question of Gravity and Light, Falconer continues his exploration of the domestic and the heartfelt. The speaker tells us up front “You’ll test/yourself the way you always have, a boy/stepping into the dark and the story/it held—whatever it was.” This becomes an invocation of sorts, an exploration.  In “On the Bluffs of Pico Duarte” the poet takes a fool-hearty cliff-side plunge into “the cold and muted dark, the stillness there” despite the fears and anxiety of his lover who waits breathlessly above. But this in a way is metaphor for the poet who always suspects “the emptiness below” who sees in the joyful scenes of pastoral nature or in the confines of a long relationship the troubles and anger, which lie, submerged, who resists the seductiveness of stillness and passivity.

In the poem “Vertigo” we are told: “When I spin, our son laughs louder, his weight/growing in my arms,” and then “When I stop, our son’s voice, the spirit, the impulse/toward joy, fills the room, but you are far away again.” There is this constant back and forth, this sense of absence in these two fathers and their relationship. This is perhaps addressed most resolutely in the poem “After You’ve Been Gone a Long Time.” The speaker says: “You came home briefly, for instance, and I was asleep, so it was as/ though you hadn’t come at all, but something was missing.” And then:

More time, I thought, might be like more water and make it taste less
bitter, but only made it more to drink.

Sometimes, I can’t bear waiting. If you were here, you’d see what I
mean, someone staring off all the time.

And there is the real sense of this “staring off,” of something or someone always missing in this domestic equation.

There are however sweet moments of tenderness and presence: “As when/I heard him cry and lumbered down the hall/to find you there, first, pacing the room, singing/softly in his ear.” This transitory joy and tenderness which seems to change like the seasons in these poems, finds comment in a poem such as “On Joy” where we are told after the lyric description of a pastoral scene “Why long for what will soon/be gone if there is no happiness/like the one passing now?”

There is poignancy to the speaker telling his son:

. . . I try
to see as you, without likeness or memory,
as I did the night that you were born.
Before, I couldn’t guess your complexion,
the color of your eyes, the mark that spread
across your back like a map of the world.
I told myself it was because you didn’t come
from me, but Mother says it was the same
for her.

In the background of the beautiful descriptions of nature in this work and indeed the limitless call of birdsong, which seems to pervade this world with parental nurture, there are also moments of darkness and tragedy, of innocence and childhood being violated.

We are told  “In Medias Res” of a dead bird “Among clover and chickweed, /it lies, slumped over, / a mound of feather breaking down/to jointed bone.” And in “Look at You” the speaker makes mention of “the shards of small eggs, /scattered like petals, at first, like confetti, the yolks still wet,”

Nesting and natural images are beautifully detailed. In “A Letter Home” the poet tells us as one partner is away working to pay the bills and the other is feeling his absence and “the boy asking where you’d gone” the poet finds a nest in the un-mowed grass “and then a meadowlark (I saw/its yellow breast) cried out.” This image of alarm on the part of the bird for its young causes the speaker to return to a scene with his son: “When he got sick, /I let him sleep with me and bathed him in/the kitchen sink, where sunlight from/the window kept him warm.” It is as though nature keeps reminding the poet of the bonds and obligations of a parent to his young.

Perhaps the gayest poem in the collection is a love poem entitled “If” which laments the loss of an old lover: “Where is he now, the other young man/written in no book? Where you left him, /asleep, half dressed.” And the poem closes with the stanza: “This is the cause of all your pain/and joy, neither of which lasts long.”

The language in this work is lyric and compelling but muted. Couplets and quatrains give this collection a nice solitary sparseness and the even metered lines ironically impose a routineness, which the speaker dispels with his self-inquiry into the nature of his stable domestic scenes and the emotional costs they have sometimes imposed.

'We Are Never Meeting in Real Life' by Samantha Irby
'Elizabeth Taylor: A Passion for Life' by Joseph Papa
‘Murphy’s Law’ by Yolanda Wallace