A Short Story from David Sedaris’ ‘Naked’ Comes to Film

A Short Story from David Sedaris’ ‘Naked’ Comes to Film 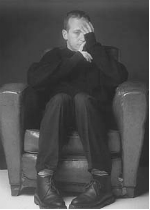 The first David Sedaris story to ever hit the big screen will be part of the Sundance Dramatic Competition in 2013. The film is based on the short story “C.O.G.” from Sedaris’ 1997 collection essays of Naked and will star gay actors Dennis O’Hare and Jonathon Groff, with Kyle Patrick Alvarez directing. Alvarez adapted the screenplay himself, and according to the Examiner, was only given permission to shoot after writing a six-page email to Sedaris explaining his motivations.

…the film follows the early experiences of David Sedaris as a man in his twenties who travels to Oregon and takes on the occupation of an apple picker. With a cocky attitude, he finds himself in a strange place and out of his element as his lifestyle and ideas are suddenly questioned by everyone he meets.

“Reading Queer” is a new annual literary event that aims to promote Miami as a center for LGBTIQ literature and create a dialogue between both experienced and emerging gay, lesbian, bisexual, transgendered and intersexed writers. The kick-off week is set for April 2014 and includes “opening and closing events, public readings, writing workshops, an anthology published by Sibling Rivalry Press and community outreach for local high school students to work with the writers”—six local writers and one nationally acclaimed LGBTIQ hybrid author. Learn more about the event, the people involved, and the application process here.

A New ‘Testament’ Told From Mary’s Point Of View

Author Colm Toíbin, winner of the 16th Lambda Literary Award for gay men’s fiction, discusses his recently released novel, The Testament of Mary, in an interview with NPR. The novel explores the life of Mary twenty years after the crucifixion and was inspired by the contrasting images in two famous paintings: Titian’s Assumption of the Virgin and Tintoretto’s “depiction of the crucifixion at the Scuola Grande di San Rocco.”

Toíbin grew up Catholic and, for a time, considered joining the priesthood. This changed upon his arrival at university, however, when exposure to new people and ideas soon led him to lose his faith…It was around this time, too, that Toibin acknowledged his homosexuality.

Listen to Toíbin talk about his experience of writing the book here.

Andrea Jenkins: Unwrapping the Vastness of the Imagination
'Mostly Dead Things' by Kristen Arnett
'Glow of Our Sweat' by Francisco Aragón