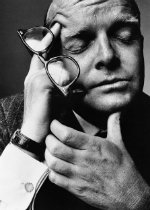 From the Los Angeles Times:

“Yachts and Things” was known to be a chapter planned for the book; the six-page story that appears in Vanity Fair was found among Capote’s archives at the New York Public Library.

In a release, Vanity Fair described the story: “[T]he narrator is clearly Truman, and ‘Mrs. Williams’ is possibly The Washington Post’s publisher, Katharine Graham. The two are set to go on an idyllic three-week cruise in the Mediterranean aboard a friend’s chartered yacht, The Witchcraft, but due to a death in his family, their Italian host — most likely Gianni Agnelli — at the last minute is unable to join them.”

According to Vanity Fair, “Yachts and Things” is the first of the missing chapters—all of which Capote claimed to have written—to be discovered, and similar to Answered Prayers, it is incomplete. Read the novel chapter here.

How AIDS Changed the Landscape of Literary Gay Romance

This Septemeber Koroko Press released author David De Bacco’s debut novel The Sushi Chef, a coming of age tale based loosely on his time living in New York during the 1990s when advances in medical research began to save the lives of many who suffered from the AIDS epidemic.

More recently De Bacco sat down with gay romance writer Sedonia Guillone to discuss “gay novels published in the mainstream press, the importance of literary outlets for questioning readers, and the impact of AIDS on their works.”

Having a relationship with people who live with HIV showed me how to lift myself up when life’s punches tried to knock me down. Compared to gay romance, I feel contemporary fiction allows a reader to relate more to the author because we’re pulling from real-life situations.

Over the past year an array of outstanding LGBTQ memoirs have hit bookstore shelves, many in the form of the graphic novel: Ellen Forney’s Marbles, Cristy C. Road’s Spit and Passion, Alison Bechdel’s Are You My Mother?, among several others. With the popularity of the graphic novel memoir rising, and so many talented voices being brought to the forefront, why not take this time to honor one of the first groundbreaking image-driven diaries?

Though it’s not exactly categorized under the title “memoir,” Nan Goldin’s The Ballad of Sexual Dependency, first published in 1986,  is a photo-diary of the award-winning photographer’s life in New York City during the late 70s to the mid 80s. Goldin often depicts themes of gender, love, domesticity, and sexuality in her work, and according to OUT magazine, though many have attempted to emulate her style since the book’s debut, very “few can achieve the striking familiarity and emotional depth evoked by the master herself.”

This October Aperature re-released the book. You can check out some of the photos here.

And, lastly, in celebration of the holiday season, feast your eyes on this deliciously depicted literary meal. From Butter Beer to Turkish Delight, this book-inspired dinner is bound to tickle your taste buds. [HuffingtonPost]