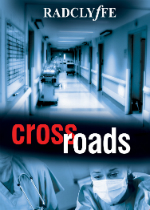 In Crossroads (Bold Strokes Books), we meet obstetrician Dr. Hollis Monroe as she is called to an emergency delivery.  The patient, Annie Colfax, eventually has a little girl—and a hysterectomy as a result of complications during the delivery.  The first chapter becomes the prologue for the rest of the story, when years later, Hollis and Annie meet again, and the two engage is a tug-of-war of emotions as they wade through events and decisions in their professional and personal lives.

The character of Dr. Monroe is developed as the wounded hero.  She holds a dark secret that leaves her emotionally paralyzed and unable to connect with people on a deeper level.  She shuns close friendships, and relationships are out of the question, until she meets Annie for the second time and begins to wonder if she can open herself to more.

Annie has her own secrets.  These lead her to be over-cautious and isolated in her personal life.  Feeling that her first relationship trapped her into a dependency that left her paralyzed when it ended, she’s unwilling to open herself to any feelings that remotely resemble attraction, let alone love.  Even though there’s something different about the lovely Dr. Monroe, Annie vacillates from craving to total dismissal, unable to embrace her own desires.

Add to this mix the fact that the two women are at loggerheads because they work in very different disciplines delivering babies into the world—Hollis as an M.D. and Annie as a midwife.  Each woman brings preconceived notions and assumptions when they are forced to work together on a project to bring midwifery and obstetrics together into a new project.  For Hollis, it’s the concern that midwives will sacrifice a mother or baby in trouble to the natural birthing process, waiting too long for medical intervention that may become necessary.  For Annie, it’s that an obstetrician-surgeon is too “knife-happy,” too quick to deliver by Caesarean, and too hasty to remove reproductive organs.  In spite of their professional differences and their reasons for not allowing themselves to yield to the growing attraction they feel, these two women begin a very tentative friendship when they are forced together professionally.

In the end, the link that seems to open the women to new possibilities is Annie’s young daughter, Callie, the baby that Hollis delivered at the start of the story.  Callie is a sweet child, and it is through her that Annie comes to appreciate Hollis as she interacts with the little girl.  Callie is also the way that Hollis becomes closer to Annie, valuing the relationship of a caring mother to her little girl and the obstacles Annie has had to overcome as a single, working mother.

Supporting roles played by other characters who have been introduced in previous works (doctors Honor Blake and Quinn Maguire, and helicopter pilot Jett McNally, for example) help to move the story along as they participate in sub-plots, tying the story together well.  These secondary characters are fully realized and have dimension, as do Hollis and Annie.  These very real portrayals serve to draw the reader into the story, making her care for all of them, and instills a longing for the main characters to heal their personal traumas, allowing them to be open to loving each other.

Crossroads is a true Radclyffe love story, told in the vein of classics like Love’s Melody Lost and Love’s Masquerade.  Crossroads will draw the reader in and make her heart ache, willing the two main characters to find love and a life together.  It’s a story that lingers long after coming to “the end.”