‘The Raven’s Heart’ by Jesse Blackadder

‘The Raven’s Heart’ by Jesse Blackadder 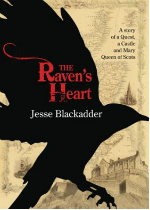 In The Raven’s Heart Jesse Blackadder transports you back to Scotland, 1561, and the royal court of Mary, Queen of Scots. At Leith, where the queen lands on her return from France; and in Edinburgh, where she first stays, we meet Alison Blackadder. Alison is the daughter of the rightful heir to Blackadder Castle. Taken by force from the family twenty-five years earlier, the castle is a place that lays at the center of Alison’s heart, and the recovery of which drives most of Alison’s actions in this action-packed historical novel.

Alison has lived her childhood disguised as a boy in order to protect her identity from the Hume clan who stole Blackadder Castle. When Queen Mary returns to Scotland after thirteen years in France, Alison is forced by her father to reinvent herself as a lady-in-waiting in order to win back the land that rightfully belongs to her family. It is no surprise that events don’t go smoothly. Set against the political unrest of Mary’s rule, The Raven’s Heart masterfully lays out the political strife, the betrayal, the loyalty and disloyalty that the queen (and everyone else) must navigate. Alison discovers that in the queen’s world, nothing is safe or certain, and because Alison has allied herself with the queen, that lack of safety and certainty affects her numerous times. In this place of shifting allegiances and clan loyalty, Alison’s quest to discover the truth about the Blackadders’ past is fraught with danger and secrets.

Alison’s double identity—raised as a boy, she knows well the “wide-legged stance, the turned out walk, the set of the jaw, the lift of the eyes when challenged”; as a female she finds her new attire far more uncomfortable than binding her chest: “the stiff bodice a hundred times more constraining… The feel of air on my collarbones is shocking, as if I am naked”—becomes more than a secret she must hide. It becomes the tool with which she wins over the queen and proves her loyalty. The scenes in which Queen Mary dresses as a (male) merchant and ventures into Edinburgh with Alison in order to directly hear how her people feel about her rarely go as planned; the queen lacks Alison’s ease as a man among common people, and during one outing they barely escape with their lives. Alison quickly falls in favor with the queen, but learns all too well how easy it is to fall out of favor.

Jesse Blackadder does a wonderful job in this novel of allowing the historical aspect to come through without overtaking the plot. Her descriptions are enjoyable and provide a wonderful sense of place and setting, even for those who know little or nothing about Scotland’s history. Her prose is both sexy and chaste, ruthless and tender, bringing out these elements in all her characters. Alison, despite her secretive ways, wears her heart on her sleeve—her devotion to the queen courses through her actions in the novel—and she is unabashed in her passions when she falls in love (with both male and female characters). Alison is no simpering female; she is brave, noble, fierce, and loyal, and though those qualities serve her well (and make her an extremely likeable narrator), they are also responsible for many foolhardy actions and plot twists.

Though The Raven’s Heart is a hefty book, Blackadder keeps her chapters short and never fails to engage the reader’s attention. Between the intrigue, revenge, plots to destroy the queen, feasts, travels, passion, and gender-bending, The Raven’s Heart rarely has a dull moment. Blackadder brings her huge cast of characters alive within the cold landscape of Scotland and the stone walls of castles and manors. Sarah Waters’ fans are sure to enjoy this new historical fiction.