Read an Excerpt from ‘I Told You So: Gore Vidal Talks Politics’

Read an Excerpt from ‘I Told You So: Gore Vidal Talks Politics’ 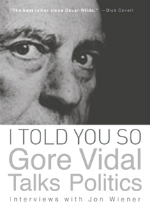 This November, OR Books, will be releasing I Told So: Gore Vidal Talks Politics—writer and radio host Jon Wiener’s exciting compilation of four interviews with Gore Vidal. Vidal, who died this past July, is known for his groundbreaking work as a novelist, essayist, and screenwriter—often exploring themes of homosexuality and social injustices—though he was “never more eloquent, or caustic, than when let loose on his favorite topic: the history and politics of the United States.”

…Vidal grapples with matters evidently close to his heart: the history of the American Empire, the rise of the National Security State, and his own life in politics, both as a commentator and candidate.

The interviews cover a twenty-year span, from 1988 to 2008, when Vidal was at the height of his powers. His extraordinary facility for developing an argument, tracing connections between past and present, and drawing on an encyclopedic knowledge of America’s place in the world, are all on full display. And, of course, it being Gore Vidal, an ample sprinkling of gloriously acerbic one-liners is also provided.

Vidal’s third publication, The City and the Pillar (E.P. Dutton & Co., Inc., 1946; Vintage, 2003) was one of the first post-World War II books to directly address male homosexuality. In this excerpt Vidal discusses his experience of being “blacked out” by the literary world after said publication, his progression into radicalism, and his political career—from growing up in a conservative family to running for Congress in upstate New York.