‘One in Every Crowd’ by Ivan E. Coyote

‘One in Every Crowd’ by Ivan E. Coyote 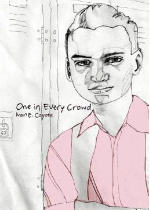 Ivan E. Coyote knows the hearts of teenagers. One in Every Crowd (Arsenal Pulp Press) is an homage to the outsider: to the young boy who steals his mother’s lipstick, to the girl who slip-slides in and out of gender identifications, to the ones who can’t put themselves in boxes. To the ones who cannot abide by the binary. It is a love-touched and memory-soaked ballad to queer youth.

Told in six eclectic parts, One in Every Crowd allows the reader to drift, piecing together an overarching tale with stories that often overlap and underscore one another. It moves in six parts through Coyote’s childhood in the Yukon Territory (“Kid I Was”) to the past in family rememberings (“Family I Have”), to the present in glimpses of kids who left deep impressions on Coyote (“Kids I Met”), and everywhere in between.

One in Every Crowd‘s fifth section, “Folks I Felt it Necessary to School in Some Way or Another, With Varying Degrees of Success,” is perhaps its most poignant. Coyote tells readers about an airplaneful of girls who laugh behind their back, sniping about what “it” is, male or female. They remember a fundamentalist Christian man who mistook them for male and deemed them acceptable. In “Bully This,” a girl named Britney reminds Coyote of ripples, and of how far their influence can go.

“I Will,” the collection’s closing story, ties together Coyote’s themes of family, love, and acceptance. In preparation for their wedding, Coyote and their sweetheart reach out to family members, seeking marriage advice, and Coyote closes by looking toward the future with a hope that years from now, queer folks will have more to say to one another about marriage — and, more broadly, about love without enforced constructions — than, “I never thought it would happen to you.”

Above all, this collection is full of heart. Coyote has one of the most unique voices this reviewer has had the pleasure of reading — like you are listening to them, sprawled on a hill by a sunset-splashed lake, a beer in hand and a fire going, warmth crackling on your skin. Their voice is strong and smooth and friendly, and after each story ends you have to take a breath. Just a long moment to breathe, and take it in, and then you nod and you’re ready for the next one.

Coyote knows the hearts of teenagers so painfully well, but this collection is not restricted to a young audience. It has stories for everyone: young, old, queer, straight, else. This collection is designed for the young “else,” for the kids who need to know that they are not alone, but it is so wholly human that this reviewer was hard-pressed to find a single person unable to relate.

One in Every Crowd is a book that belongs in the hands of queer youth and in the hands of their oppressors. It’s a heartfelt and rich look at what it’s like to be else, to be outside, to toe the lines and then step over them. It can teach, it can support.

It’s a book that will change readers, and leave them knowing that being changed by it is a privilege.

Sam Schooler is a queer author from Cincinnati, Ohio. She likes superheroes, cities, and Subway. She is currently working on earning her degrees in psychology and journalism. More of her writing can be found at http://samschooler.com/