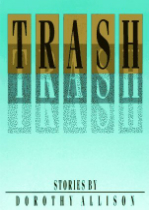 Between the ages of 12 and 15, I spent at least four hours a day reading stories about sex between women. My time was divided between my father’s Letters to Penthouse collection, and Xena: Warrior Princess and Star Trek: Voyager fan fiction websites.  It wasn’t just that these stories turned me on. It was that, whether they were about Ancient Greek warriors or varsity cheerleaders, these stories transported me from a small town where I was a scared, isolated lesbian to a fantasy world where women acted on their desires and were rewarded for it with love, community, and orgasms.

Once I got a girlfriend and started having sex of my very own, I found that I was no longer interested in those stories. I was not a skinny, perky-breasted woman who perpetually smelled like roses. The sex I had didn’t involve fireplaces, or perfectly timed, simultaneous climaxes. Sometimes it wasn’t even good. I no longer needed fantasy. What I needed was reality.

Thankfully, I found lesbian literature. Authors like Dorothy Allison, Jeanette Winterson, and Rebecca Brown wrote about women who had jobs and families and lives that resembled something I could aspire and relate to. That these women had sex with each other was just part of the picture, but it was an important part. One that shocked, excited and ultimately expanded my understanding of what was possible between human beings as well as the possibilities of my own desires.

“Swallow it,” Jay said. Her fingers were in my mouth, thick with the juice from between her legs. She was leaning forward, her full weight pressing me down. I swallowed, sucked between each knuckle, and swallowed again. Her other hand worked between us, pinching me but forcing the thick cream out of my cunt. She brought it up and pushed it into my mouth, took the hand I’d cleaned and smeared it again with her own musky gravy.

When I first read this scene from Dorothy Allison’s short story “A Lesbian Appetite,” (Trash, Firebrand Books, 1988; Plume, 2002) I thought I was going to throw up. After the two women eat each other’s come, Jay stands up and pees into the narrator’s mouth, which the narrator then describes in graphic detail. All I could think was: I don’t want to drink pee or eat my gravy cum and I feel really uncomfortable reading about anyone else doing it. But Dorothy Allison is not interested in making her readers comfortable. She is interested in making her readers confront the reality of sex. Sex is not a delicate, sanitary act. Even if you’re not peeing on anyone, sex is smelly, sweaty; it causes us to make strange faces and noises and expose body parts that sag and flap in ways we can’t control. But when sex is not that, it also isn’t much fun. So, Dorothy Allison asks, why can’t the sex we actually have be sexy? Why can’t it be just as much a part of my sexual imagination as alabaster-skinned maidens being ravished by candlelight?

This scene also takes place in the middle of a story about deprivation and hunger. The narrator is a working class Southerner who as a child never had enough food to eat, who then moves to the North where she is made to feel ashamed for the way she eats, and who eventually has such bad health that eating the foods she loves becomes impossible. But in this scene, the narrator gets fed by a partner who loves her, and she can eat as much as she wants without shame or consequence. It is a rare moment of fullness.

I pressed my face against its bone and it moved.  She was letting me.  All this was happening. I smelled the future right there, a present and a past. All that went through her, known through the soft sweet flesh of her lips and clit. It was like my face felt loved temporarily.  It wasn’t even long, this feeling of total rightness. I was telling her clit a story.

In this excerpt from Eileen Myles’ Inferno (OR Books, 2010), the narrator recounts what it was like to go down on a woman for the first time. I don’t remember my exact thoughts when I first went down on a woman, but I remember how exciting and overwhelming it was to realize where my mouth was, that someone was letting me put my mouth there, that I could use any part of my body to make someone else feel good. And I remember how embarrassed I felt. In an interview with Book Forum Eileen Myles said, “That was one of the hardest things I’ve ever had to write. I thought, many times, ‘How can I write that and not feel humiliation?. . .The narrator is so vulnerable.’” Just as Dorothy Allison’s scene reminds me of the passionate intensity of sex, Eileen Myles’ scene reminds me of its wonder and confusion.

I recently read Virginia Woolf’s To the Lighthouse (Hogarth Press, 1927; Harcourt, 1989) for the third time.  Woolf’s stream of consciousness style made my first read-through torturous, but now I see that among other things, Woolf is a master of sexual tension. In one scene Mrs. Ramsay, a wife and mother, goes into the room of her bachelorette boarder, Lily Briscoe. Lily puts her head on Mrs. Ramsay’s lap, listens to her gossip and contemplates how she can ever explain her feelings of attraction to Mrs. Ramsay.

Sitting on the floor with her arms around Mrs. Ramsay’s knees, close as she could get, smiling to think that Mrs. Ramsay would never know the reason of that pressure, she imagined how in the chambers of the mind and heart of the woman who was physically touching her, were stood, like treasures in the tombs of kings, tablets bearing sacred inscriptions, which if one could spell them out, would teach one everything, but they would never be offered openly, never made public. What art was there known to love or cunning, by which one pressed through into those secret chambers? What device for becoming, like waters poured into one jar, inextricably the same, one with the object one adored?

I don’t know about you, but I feel the overwhelming urge to hump something when I read this. Nothing happens. No kiss, no declaration of love, and it is completely inside Lily’s head. I don’t even know what Mrs. Ramsay looks like when Lily imagines all this. But I don’t need to know, because the scene is a tease, and like all teases, the most sexual, satisfying part of it is the imagined moments of intimacy that cannot happen in the physical realm. I get to experience both Mrs. Ramsay’s secret chamber and know that I will never have it, a frustration that is as delicious as it is tragic. It also points to the fact that even when you do have sex, you will never truly know someone, nor they you. So, in a way, touching someone’s knee is just as intimate as putting their clit in your mouth or eating their pee… I’m pretty sure I saw that in a Hallmark card once.

I still have a fondness for the fan fiction and pornography I read as a kid. Though the fantasies were superficial and predictable, I could read these stories and know that I wasn’t alone in my desire for women or a queer community who understood me. But just as a one night stand isn’t as meaningful as sex with a partner who knows the exact spot on your ear to suck and who will uncurl you from the fetal position and tell you that yes, you will get a book deal someday, sex writing isn’t as meaningful unless there is an emotional depth and honesty behind it. If that honesty happens to shock, embarrass, or even scare the reader, then all the better. At their best, stories show us not just what we want to see but what we are afraid to see, what we never even knew was possible. By doing so they actually make us less afraid to expand our notions of who we are and what we can achieve and express in this world. What could be sexier than that?

Shelly Oria: On Her New Collection 'New York 1, Tel Aviv 0,' Her Favorite Queer Writers, and the Pow...
Reader Meet Author: Personal Advice from Kenyon Farrow
In an Era of Fake News, Fiction May Save Us

Amy Gall received her MFA in fiction from The New School in 2012. Her work has been published in The Frisky, Poets & Writers and is forthcoming in the anthology 'Queer Landscapes'. She is currently working on a novel about cryogenically frozen lesbians. You can read an excerpt from that and more at: http://writersbloq.com/amy-gall.