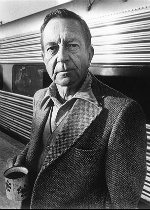 In his personal essay, “John Cheever Turns 100”, Lambda Award-winning author Allan Gurganus reminisces about his time at the Iowa Writers’ Workshop where John Cheever became his close friend and mentor. From his first step into Cheever’s classroom to their reunion years later in New York, Gurganus tells the story of an intimate, caring friendship—revealing both Cheever’s charms and flaws, his genius and his downfalls, the magic of his stories, and his grace as a teacher.

And those of us who got to love him know, with all his wounds and losses, the fervor of his love is what still makes a lighthouse of his prose. The best of John’s writing is so good, it long ago ceased to be a porthole onto created horizons; it has become a kind of sunlit gold standard itself.

…We must admit John’s legendary disenchantments. But past the valley of the shadow, let us also describe, on his hundredth birthday, that playful luminous spirit: his pride in his gifted children, his complex love for his wife, his miraculous mastery of craft, and its ongoing gift to us.

Man Chronicles Year Pretending to be Gay in the Bible Belt

Four years ago, when Timothy Kureck’s close friend came out to him as a lesbian after having been disowned by her family, Kureck—a conservative Christian living in his hometown of Nashville and a loyal member of the Baptist Church—believed her to be an abomination and remained unmoved. Following a thorough examination of his reaction to his friend and a re-examination of the belief system he grew up with, Kureck “decided the only way he could truly understand what it was like to be a sexual minority in a predominantly straight world was to actually live as a gay man.” In 2009, Kureck came out as gay to his family and friends.

From the Kansas City Star:

“I learned how crushing and debilitating it is to be in the closet.” At the same time, “You have the potential to lose everything just by coming out and telling people who you are.”

Kureck’s year-long chronicle, The Cross in the Closet, was released by BlueHead publishing this October and has been a controversial topic among the LGBTQ community. Read more about what Kureck has to say about his experience here.

Catching Up with Emma Donoghue

Keeping on the topic of coming out—acclaimed author Emma Donoghue discusses the best-selling book that put her back in the closet, as well as what about queerness draws her to the art of story-telling in an interview with Out Magazine.

What to Read into Obama and Romney’s Favorite Books

With the conclusion of the presidential debates and Election Day drawing nearer, The Los Angeles Times offers a closer look at each candidate based on his favorite books. See what Obama and Romney have tucked into their bookshelves here.