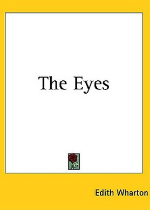 “We were put in the mood for ghosts….”

So begins what has been called one of Edith Wharton’s finest short stories, “The Eyes.” “The Eyes” is a psychological fable artfully disguised as a Gothic ghost story, and as such “The Eyes” warns its readers, among other things, against the personal consequences of denying one’s sexuality.

And since All Hallows’ Eve is upon us, putting us all in the mood for ghosts, one of the editors at Lambda Literary (William “Johnson) and I agreed:  This might be the best time, the most chillingly fun time, to focus on “The Eyes.”

Other readings of “The Eyes” have not been so monstrous as to ignore all the strong hints that the story’s central character, a man of letters named Andrew Culwin, is homosexual. Culwin, whose mind is “like a forum, or some open meeting place for the exchange of ideas,” hosts frequent dinners for his circle of all-male friends. It is important at this time to note that Culwin’s group, like most cliques, has an inner and outer circle. But more on these group dynamics later. For now, suffice to say that “The Eyes” takes place in Culwin’s home—in a comfortable library filled with cigar smoke—following just such an all-male dinner. The guests are taking turns telling ghost stories. First there are seven men. Then, as the night wears on, the crowd dwindles to Culwin and the unnamed narrator. The time is presumably the late nineteenth century, or the early twentieth; the place: presumably somewhere in Europe, probablyRome. Also present is Culwin’s latest young protégé, Phil Frenham. Frenham is handsome and interested in becoming a writer, both aspects of character so typical in Culwin’s protégés that they come as no surprise to Culwin’s guests. On this night, however, Culwin does surprise the narrator and Frenham by taking leave of his usual role, that of “a spectator, a humorous detached observer,” and adding two ghost stories of his own to theirs.

Each of Culwin’s ghost stories involve two conflicted periods in his life during which he was haunted each night by a disembodied pair of red eyes peering from the foot of his bed. During the first haunting, the eyes appeared after he had resolved, for largely financial and societal reasons, to marry his cousin—the plain, if sincere and sympathetic, Alice Newell. Culwin ultimately thinks better of that decision and reneges … with the result that the eyes disappear.

In the second instance, the eyes reappear when Culwin is stringing along a former protégé, Alice Newell’s cousin Gilbert Noyes. Culwin tells his guests that he’d concluded the otherwise pleasant Noyes was talentless, but kept delaying breaking the news because of Noyes’s considerable beauty and because, somewhat admirably, of the debt Culwin felt he owed Alice, whom he had so callously jilted. Once Culwin finally performs his duty and breaks with Noyes, the eyes, much to his relief, again disappear.

What is scary, or what is scary to me, at least, is how other readers have moralistically (mis)read Culwin, describing him solely as “degenerate,” vampiristic and a whole host of other chillingly monstrous names.[i] True, these facets of Culwin’s character cannot be denied: He is, after all, a writer, and he is, after all, a homosexual with a wicked sense of humor. But what such readings don’t point out is that Culwin is described by Fred Murchard, a member of his outer circle, as liking his protégés “juicy,” while the unnamed narrator, a member of Culwin’s inner circle, tells us that Culwin is not a “degenerating” influence on his recruits. He tells us, rather, that “the skill with which Culwin contrived to stimulate curiosities without robbing them of their bloom of awe seemed … sufficient answer to Murchard’s ogreish metaphor.”

From this point of view, then, a point of view free of the jealousies Murchard may feel as a member of Culwin’s outer circle, Culwin is not a degenerate vampire but a responsible man carrying on the long, now largely out-of-date tradition of forming same-sex erotically charged intergenerational relationships for the purpose of mentorship.

From this point view, then, we can also conclude that the eyes did not belong, as Culwin believes, to two different ghosts but to his own individual consciousness, an almost fully developed, fully-fledged consciousness that troubled him, first because he planned to deny his own—and Alice’s—sexuality by marrying, and because he was stalling on his responsibility to Gilbert Noyes.

Wharton was a friend and admirer of Henry James, the author, the master, and man of leisure who, like the fictional Culwin, shared his vast talents with younger men (see Dearly Beloved Friends: Henry James’s Letters to Younger Men). And in her introduction to her Ghost Stories, Wharton praises James’s The Turn of the Screw, another ghost story that can be read as a warning against suppressed sexuality, which brings me to my next recommendation. The idea that the governess at the center of The Turn of the Screw is not really seeing ghosts at all but only the phantoms of her own repressed sexuality is one interpretation of the story William Archibald and the gay Truman Capote picked up on in their big-screen adaptation of the novella. The movie is The Innocents (1961) and it features the conflicted gay actor Michael Redgrave, patriarch of a family of actors, including Vanessa and Lynn Redgrave.

Having put you in what I hope is the mood for ghosts, I leave you now to head for the kitchen again, to go out and find a copy of The Ghost Stories of Edith Wharton, and/or to add The Innocents to your Netflix queue. Don’t forget the popcorn.

[i] See, for instance, “The Girl in the Library: Edith Wharton’s ‘The Eyes’ and American Gothic Traditions,” by Charles L. Crow, an essay in Spectral America: Phantoms and The National Imagination, Jeffrey Andrew Weinstock, ed.