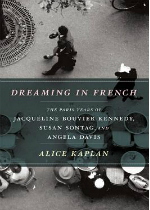 Dreaming in French  (University of Chicago Press) is a fascinating triple biography examining the effects of study abroad on three very different women. In a little over a decade, between 1949 and 1963, Jacqueline Bouvier Kennedy, Susan Sontag, and Angela Davis studied abroad in France. This unexpected combination of women, together in a single book, makes for an engaging read and a notable one for LGBTQ readers.

Kaplan narrates a compelling story for each of these women, all in their twenties while in France. Kaplan teases out the life circumstances that brought them to France, explores their lives in France, and the influence of French culture on their subsequent activities. Most interesting to me was learning about the international influence of Angela Davis during and after her trial, but each of the biographies is lively and insightful. While the lives and spheres of influence of each of these women do not overlap substantially, through her generative framework, Kaplan weaves a compelling whole. Ultimately, what binds this book is France; France emerges as a central character. Kaplan’s appreciation for French history and culture imbues the book. The knowledge and details that Kaplan shares, as the book unfolds, are a great pleasure.

Dreaming in French expands our sense of biography. In Kaplan’s hands, biography is not simply the story of one life; rather, biography becomes a tool to illuminate experiences that shape lives. While the lives of Kaplan’s subjects are not directly intertwined, they are connected in a way that first appears oblique but ultimately is meaningful and satisfying. Dreaming in French also expands our frame of understanding lives of Americans through transnational experiences. While never didactic, Dreaming in French provides a persuasive rationale for international study, particularly study focused on the humanities.

Perhaps the most important thing about Dreaming in French is how Kaplan situates women in key roles in philosophy, intellectual leadership, and politics. Kaplan takes women as the central subject of the book, never allowing them to be overshadowed by men in her appraisals of their work and their influence.

Dreaming in French is of interest to queer readers for two reasons. First, Kaplan’s exploration of Sontag’s lesbianism during the late 1950s and the early 1960s is an interesting foray into the understanding of lesbian lives during decades that have been underexplored in queer scholarship. Second, Kaplan thoughtfully situates Sontag as a lesbian intellectual in relationship to heterosexuals. Without ceding or diminishing the identity of lesbian, Kaplan provides a thoughtful assessment of Sontag’s sexuality in relationship to the multiple communities Sontag traversed.

A lively, engaging book filled with history, travelogue, politics, and biography, Dreaming in French satisfies with its smart framework and exceptional execution.