‘Buddha in My Belly’ by Brittany K. Fonte

‘Buddha in My Belly’ by Brittany K. Fonte 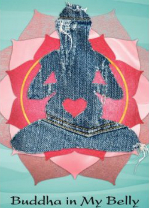 If Roseanne Barr wrote prose poems, they wouldn’t be so very different from those in Buddha in My Belly, Brittany K. Fonte’s debut collection (Hopewell Publications, 2012).  Like Barr’s routines, these pieces are sardonic, honest—and about women. Sometimes it’s hard to be one. Okay, that was Tammy. Anyway.

Buddha is divided into three sections: “Practice,” “Humility,” and “Lovingkindness.” A spiritual practice encouraging the development of virtues is not easy for one who is observant and conscionable, as is Ms. Fonte. Much of the collection captures her struggle. The Buddha in Fonte’s belly is more than ethical path of the East or 12-step meeting. Fonte’s Buddha has ten pudgy fingers, ten squirming toes, and spits up on her onesies.

According to her bio, Fonte and her partner have two children and indeed Fonte writes of the collateral damage of motherhood, such as the jeans which no longer fit. She began her romantic career in the normative world.  “I married young in a rabid display of hierarchical power and alcohol advertising…” Having divorced her husband, she found her true path.

“I am Not Produce,” one of the more intriguing pieces, begins, “I am graying and thirty-three; I am pushing forty and other people’s borders and the reflective guidelines of decency in pajama pants, also a rickety motor home/stroller/carry-all cart in the produce section of an organic market.” A frequent customer “with a cancer past” speaks through a Servox, his vocal imperfections startling the “twentysomething vegan(s),” but not children, “who do not cry at his robotic voice.” The author’s reaction: “I know I should learn the lesson he is here to teach, because I was a philosophy major and my middle-class privilege expects I dry-hump all that is logical and modest, masculine and old.”

This is not the last time she references privilege—or is hyper-conscious of her body. “Still, I feel my too-ripe stomach inching just a thumb’s inch over my too young jeans. I pick up an avocado and molest its brown skin, wishing I had the money and the contacts to slice my own mid-section crosswise, like I’d do to such fruit to make guacamole: Use a spoon to carefully remove the soft fat from the beaten pleather, discard a hard seed, pack the remaining flesh into a concave mode with ingredients that make me suck my cheeks in naturally.”

Icky, maybe, but an awesome icky. Fonte’s lamentation of flesh and flab is familiar territory for women and men, L or G or B or T, or even S (straight).  Sometimes I thought I was reading my own journals from years ago, and was reminded—not by Fonte but by my earthy angel—that it is not useful to live life as if before mirrors in a department store changing room.

Many of the pieces, each of which runs from two to four pages, are like a slam monologue; I often mind’s-eyed the poet at the Nuyorican. Writing is authentic when it comes across as the author being herself, and Fonte comes across as thinker and doer. Given the time it takes to raise kids and offer sweet ministrations to a partner, we’re lucky she has time to write.

Ariel Schrag: On Her New Novel 'Adam,' Writing for the 'L Word,' and Trans Inclusiveness
'The Man With the Overcoat' by David Finkle
‘Postcards from the Canyon’ by Lisa Gitlin