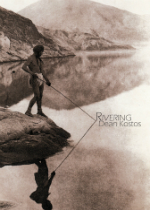 The examined life, in poetry, is sometimes a rant. Not so Dean Kostos’s new collection of poems, Rivering (Spuyten Duyvil Press), which is just the opposite. This collection presents self-discovery and homage with a pure air of ceremony, startling visual imagery, and a refreshing clarity of language. These poems encompass a whole range of personal and spiritual reflection, but we are always welcomed to share in a dialogue, rather than just being sounding boards for monologues of complaint.  The thematic fulcrum of ‘rivers’—both as subject and symbol—is used powerfully throughout these works, yet the poems never suffer from an arid dependence on such specific metaphor. Rather, Kostos uses analogy and metaphor to illumine relationships, distill self-knowledge and reveal meaning. From the first line’s inviting call to look upon surfaces and to then go deeply down into what is found there, we begin a rich journey to the poet’s life.

_____Come to water as to a page/…Reflection swims into itself…

And indeed, Kostos does come to the rivers of the writing life, inviting us to his experience and his almost Delphic construction of the world in memory. As he looks back, unravels, unearths, discovers, and upends, each poem becomes a tantalus, showing its vibrant waters, smoke, or  simmering fires.  These are poems of dense, rich vision, yet they are formally constructed with breathing space that allows the reader to move through the ideas and language seamlessly. Composed primarily of couplet, tercet and quatrain forms (though not exclusively), these formal choices stabilize the reading and let the tenor of the poems—of which there is much—sound on the page. The effect is that of being able to feel the solidity or delicacy of the words as you read them. Tinged with patina, and a melancholic sensibility, these poems never become mordant or overbearing.  His words have the quality of a daguerreotype, and photography is apt for a subject. From “Photograph of Myself, Age Four, Asleep in My Father’s Arms”:

A son is a valley,/an undulation,/
his arm a rivulet/curving around a sleeping doll./
In the world of dolls,/he is an elder,/
father of this glossy/homunculus.

The accumulative effect of these poems is that of a photographic album spanning vast time periods, or a walk through a long hall of paintings, introducing us to the most intriguing characters from history and imagination and the poet’s own life. In the middle section of the volume, Kostos reveals his affinity and love (he studied art history and is an artist as well) for ekphrastic poems—a series inspired by visual subjects—and it is in this section that some of the most arresting poems live. Whether re-imagining a last painting by Gorky, a photograph of Walt Whitman, or an ancient sculpture of a young man, the poems have a sense of telescopic time as each of these unique subjects come right to the surface in front of us. Poems using paintings or other art as a subject are not easy to write at all: the poet must compete with art already created, and create something new which might be art of its own. From “Gradual Dissolve: Three Views of Eakins’s Photographic Portrait of Walt Whitman”:

He glows bronze/as the arms of gaunt soldiers,/
while the posts of his chair/lose outlines/the window to the left,/
a reflection of fire on tin./

Other poems invite us into the lives of literary or real personas such as Hart Crane, Sylvia Plath, Arshile Gorky, or the tormented clairvoyant of the computer, Alan Turing.  In “Miss Havisham,” Kostos creates one of the most chilling depictions of the literary character I’ve ever read:

His Hart Crane returns to the first and last river of his life, and Kostos compacts a whole life in just ten stanzas. From “Hart Crane Before Drowning”:

A volume of poetry, unlike a work of fiction, has to make the reader believe in the world of the writer in a very short frame of time. Using a lexicon of inordinately unique and powerful streams of image and voice, Kostos here creates and recreates both his life, and the lives of those who have come into it—family, friends, or historical and/or literary presences. These poems are acute and deeply felt observations of the seen, yet show us the architecture of the invisible—that place where imagination is fostered by direct experience. Kostos ferries us to realms of illumination and the rivers on which he does so, provide us with the solace of memory and prayer. These are poems of a constant affirmation of life.

Augusten Burroughs: On Grappling with Love and Desire
'Coming to Life' by Joy Ladin
The Banal and the Profane: Martin Wilson