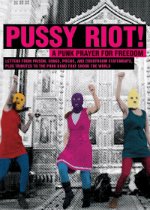 On September 21st, 2012 The Feminist Press at CUNY will be releasing PUSSY RIOT! A Punk Prayer for Freedom.

[The eBook] will include letters from jail, translated courtroom statements, and tributes written by people Yoko Ono, JD Samson and Johanna Fateman of Le Tigre, Karen Finley, Justin Vivian Bond, and Eileen Myles. Proceeds from the book, which will be available on September 21, will go to support Pussy Riot’s legal defense.

Check out a video the band made thanking their supporters, and learn more here.

Amherst College scholars suspect they may have found the second existing photo of Emily Dickinson. While the well-known image of Dickinson as a teenage girl is dated around 1847, before she began her writing career, the new photo portrays the poet approximately 12 years later, sitting beside Kate Scott Turner (Dickinson’s rumored-lover). [HuffingtonPost / Advocate]

While many may have mixed (or perhaps not-so-mixed) feelings about author Bret Easton Ellis, everyone can agree he is not shy about his opinions—especially those who follow him on Twitter. As reported by Salon: “Bret Easton Ellis went off big time against David Foster Wallace…driven into a serial, sputtering rage by his reading of D.T. Max’s newly published biography of Wallace, Every Love Story Is a Ghost.”

Editor Gerald Howard (who had the opportunity to work with both Wallace and Ellis) offers some backstory on the recent scandal.

On a lighter note, and while we’re still on the subject of scandals, here’s an article from Flavorwire Books listing some of the “best put-downs” from literature’s most famous characters. A personal favorite: