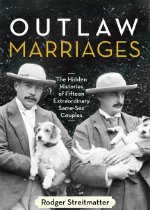 What do “The Man in the Arrow Shirt” and the original “Blue Haired Lady” have in common? As Rodger Streitmatter explains in this brisk series of double biographies, both were one half of a long-term same sex couple.

Each chapter in Outlaw Marriages begins with a photo of the couple, a brief introduction to who they were and their contribution to American culture and society. This is followed by a few biographical paragraphs on each partner up to their meeting each other. “Creating an Outlaw Marriage” details how they met and the beginnings of their relationship while additional sections and “Complications in the Outlaw Marriage” limn the partners’ successes, personal and professional ups and downs. Streitmatter, a journalist and professor in the School of Communication at American University in Washington DC, fits a fair amount of detail into this framework, and each chapter closes with the end of the relationship, and the deaths of either one or both partners.

The length of time these couples spent together range from the eight year relationship of artists Jasper Johns and Robert Rauschenberg to the fifty six year relationship of writer Janet Flanner (known the pages of The New Yorker by her pseudonym Genêt) and her partner Solita Solano (The average relationship length in Outlaw Marriages is thirty- five years). The majority of the couples, like social reformer Jane Addams and her partner Mary Rozet Smith, for example, consist of one “famous” person supported by the work of a behind-the-scenes spouse. One of the book’s theses is that the more public partners did their best work when together. Streitmatter’s case is most strongly made in his consideration of the fifteen year relationship of Tennessee Williams and Frank Merlo, with Williams spiraling downward after Merlo’s death in 1963. However, can one truly understand the shifts in Aaron Copeland’s compositions as reflections of his forty-four year involvement with Victor Kraft? Perhaps, perhaps not.

While Outlaw Marriages is a quick read, relying mainly on secondary sources, it is well researched and the stories of these couples are fascinating. Streitmatter also adds to our picture of poet and activist Audre Lorde through his interviews with her first partner, Frances Clayton. Readers can’t fail to be drawn in by these fascinating men and women, and the variations in their relationships. There are “discordant” couples, like James Baldwin and the bisexual Lucien Happersberger, for example, as well as two “triple” relationships, one between art collectors John Marshall and Ned Warren (depicted on the books cover with their dogs) and Warren’s happy-to-be-married-in-name-only wife Mary Bliss; the other with Bessie Marbury, interior designer Elsie de Wolfe (she of the “blue hair”) and Sir Charles Mendl, whom de Wolfe married solely for his title. Some relationships come apart over one partner wanting to be more open about the relationship than the other, as was the case with both Jasper Johns and Robert Rauschenberg. A number, like Lorde and Clayton, seem to suffer what Streitmatter refers to as the “twenty year itch,” where one partner leaves another after two decades. 19th century educator Martha Carey Thomas even attempted what could be called “Outlaw Bigamy,” balancing relationships with women in two different states at the same time.

From Walt Whitman and Peter Doyle (twenty-seven years together) in the 19th century, to the fifty year relationship of “Arrow Shirt Man” illustrator J. C. Leyendecker and model and muse Charles Beach, and the forty-four year relationship of filmmakers Ismail Merchant and James Ivory which stretched into the 21st century, Outlaw Marriages is an important reminder that some of us have not needed the sanction of the state in order to create fulfilling lives together.

'The Right to Be Out: Sexual Orientation and Gender Identity in America’s Public Schools' By Stuart ...
'The Lurid Sea' by Tom Cardamone
'The Music of What Happens' by Bill Konigsberg