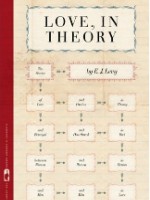 We should consider E.J. Levy’s debut collection, Love, In Theory, (winner of the Flannery O’Connor Award for Short Fiction) as a lesser-known corollary of The Notorious B.I.G.’s formulation, “Mo’ Money, Mo’ Problems.”  In her case:  “Mo’ Education, Mo’ Problems.”  Because even though the majority of characters in Love, In Theory are either academics themselves or are related to academia in some way, despite their deep wells of knowledge, they still find themselves at odds figuring out this crazy little thing called love.

In this collection, love takes on many forms—heterosexual, homosexual, bisexual, lesbian—but the infidelity remains constant. Betrayals, of one kind or another are the predominant catalysts for most of the stories, but Levy finds interesting tweaks on the matter.  In “Theory of Enlightenment,” Renee finds her boyfriend, Richard, jilting her not for another woman, but for an ashram in upstate New York.  (“I feel like a karmic rest stop,” she says.)  The problem of getting spiritually dumped recurs, this time with lesbians, in “Theory of Transportation.”

But Love, In Theory goes beyond being a catalog of indignities and unfaithfulness.  In almost every story, Levy sneaks in sly, cerebral humor.  She’s unafraid of using puns and bons mots as an antidote to the maudlin and bathetic, giving her writing a lightness that doesn’t lessen the heartbreak, but instead lends it a more knowing ache.

The erudition of her characters also offers them a certain perspective on their lives.  The married professor in “My Life in Theory,” for example, knows that he shouldn’t fall for a young man, but does so anyway, and though he tries to keep his voice disinterested throughout the story, the emotional cracks start to show.

Indeed, the tone throughout the stories might, at times, seem too homogenous, and one drawback of having a consistent voice and worldview in a collection is that the stories that deviate from that voice tend to stick out.  In particular, the decidedly blue-collar orderly who attends the titular “The Three Christs of Moose Lake, Minnesota” feels slightly off.  In isolation, the story stands up well; indeed, it was a finalist for the prestigious Nelson Algren Award from the Chicago Tribune.  However, juxtaposed against the other stories, the narrator’s constant use of “y’know” and his insistence that he needs to look up certain words and literary allusions comes off as disingenuous.

Luckily, Levy includes some well-needed thematic variations.  The half-Korean main character in “Small Bright Thing,” for instance, introduces considerations of race, while “Theory of the Leisure Class” leaves the United States (many of the stories have a Minnesota connection) for the more exotic climes of Costa Rica.

Better, instead, is when Levy varies her formal structure. “Theory of Dramatic Action,” for instance, introduces a 2nd-person narrator to tell of a lesbian film studies student contemplating an affair with her married—and male—classics professor, while “Theory of the Leisure Class” divides the story into discrete sections, each taking its title from one of Thorstein Veblen’s chapters.  These stories offer a more convincing portrait of Levy’s range, because even though Levy’s characters don’t always know what they want to be, it’s as if the more education they come across, the more problems they see.