Experimental filmmaker and poet James Broughton—whose 1967 classic film, The Bed raised eyebrows with its liberal use of joyous nudity—is about to be revived as a cultural icon by a compelling new documentary feature, Big Joy: The Adventures of James Broughton.

“James will continually be rediscovered as this golden secret of West Coast Bohemia, who had formed his voice before the Beat poets arrived,” says poet Neeli Cherkovski in the film.  “He was an outsider’s outsider—under the underground.”

In fact, Broughton was part of the largely gay San Francisco Renaissance group who fused the arts and laid the groundwork for the coming Beat Generation.

The Big Joy documentary steps into the complex story of Broughton (1913-1999), where “Adventure, not predicament” is life’s motto, and where nursery rhymes and silly fantastical images pave the way to the mystical, serious and profound.

“Yes, this is the story of James, but it’s also the universal story of discovering joy in our lives,” said producer Stephen Silha.  “James stuck to his true artistic path, and it put him through many agonizing journeys, but in the end, it delivered him to Big Joy, a name given him by his publisher, Jargon Society’s Jonathan Williams.”

The film explores his life, his art, his unconventional choices (like marrying a young man), his role in creating some of America’s most famous poetic movements, and his ceaseless ability to follow his own artistic tune (he produced 23 wildly different books of poetry, and 23 films). 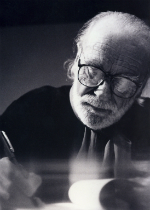 Broughton’s story navigates his own struggle and eventual resolution with his sexuality, the family and societal pressures he felt because of this, as well as his journey with his personal artistic expression.  His story transverses the Great Depression, the McCarthy Era, the Beat movement, the Hippie movement and Gay liberation.

In 1989 James Broughton received the American Film Institute’s Lifetime Achievement Award for Experimental Film (the Maya Deren Award).  “Cinema saved me from suicide,” he once said.  But Broughton’s filmmaking wasn’t like anyone else’s.  Today he is considered the “father of West Coast experimental film.”  His films broke taboos (including frontal nudity), inserted quirk, and broadcast the whimsical while being among the first to meld both image and poetry.

Broughton’s poetic journals, films and poems form the spine of the documentary, to be released in 2013.  Filmmakers Stephen Silha and Eric Slade have worked for four years to discover and hone the Broughton story, interviewing 37 people on camera and reading through boxes of correspondence and unpublished journals.

Silha, who was a reporter for The Christian Science Monitor and The Minneapolis Star, met Broughton in 1989, and developed a friendship with him and his creative and life partner Joel Singer, an artist and filmmaker who holds the rights to Broughton’s work and is an executive producer of the film.  He enlisted the help of Eric Slade, who has a strong background with such PBS productions as “History Detectives,” and who produced and directed the 2001 Harry Hay documentary Hope Along the Wind.

“I knew vaguely about James Broughton,” Slade said. “But working on Big Joy has made me a huge fan of what he has to offer to this crazy world—an articulate example of his own advice to ‘Follow your own weird.’”

But mostly Broughton tells his own story, with animated journal entries, poems, and clips from interviews with him.

To learn more about the project, and Broughton, curious multi-media mavens can go to the website  www.bigjoy.org .  The project also has a Facebook page, James Broughton and Big Joy, and a You Tube channel.

A poem by James Broughton

(Film still: The Bed via MoMA)