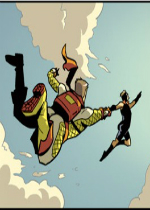 Queer super heroes, graphic art, alternate universe adventures—fan of any or all of the above? Then you’ll be happy to hear that Dark Horse Comics will be releasing a digital comic based on the popular gay web series Husbands. While the web series follows the relationship of a same-sex couple after they wake up wed in Las Vegas, in the comic version, the protagonists “turn up in an alternate universe where they have super powers and other heroic abilities.”

Written by the sitcom’s co-creators Brad Bell and Hugo Award-winning Jane Espenson (Buffy the Vampire Slayer), the comic is sure to satisfy regular watchers of the show, as well as regular-reading comic book fans.

It seemed like such a natural fit. We were already embracing and subverting sitcom tropes and the classic newlywed sitcom with Husbands,” says Espenson. “Comic books get a lot of fuel from the same thing: mixing modern life with classic forms of comic book storytelling. And that is something that I love to do: Taking characters and seeing how they would act if they were a superhero or in a fairy tale. I’m talking to you from the offices of Once Upon a Time right now, so I understand it. It was very fun, easy, and natural to take Cheeks, Brady, and Haley and put them in different alternate comic book worlds. And there all sorts of fun, inside jokes for the fans.

Check out some of the artwork from the comic book and read more about the forthcoming release here.