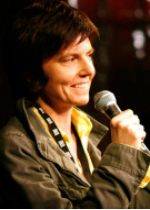 On August 3rd stand-up comedian Tig Notaro performed an awe-inspiring set focused on her breast cancer diagnosis at the Largo in Los Angeles.  The routine has now become “one of the most talked about moments in the comedy world.”

Notaro speaks of her experience in an interview with the HuffingtonPost:

I felt like I was really in a room full of friends. It sounds so cliché and silly but it really was. When I told some jokes they laughed so hard and when they were bummed there were people crying, and then I was just being informative, they were just listening and I remember being onstage thinking, “Oh, I feel like this might be a very special moment in my life.”

Louis C.K. will be releasing the routine as an album on his website on October 5th—but that’s not all that’s coming of Notaro’s incredible performance. Ecco Press has announced that Notaro’s collection of autobiographical essays is set for publication in 2015.

If you’ve never had the opportunity to see Tig perform (or you have and just can’t get enough), check out some footage from her recent set on the CONAN After-Hours Stand-up Series:

[via the New York Times]