Chronicling the Stories of LGBT Youth in America

Chronicling the Stories of LGBT Youth in America 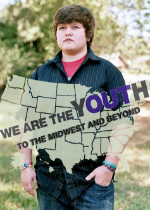 We Are the Youth, a “photographic journalism project,” has been spreading the stories of LGBT youth throughout the United States since June 2010:

Through photographic portraits and “as told to” interviews in the participants’ own voices, We Are the Youth captures the incredible diversity and uniqueness among the LGBT youth population. We Are the Youth addresses the lack of visibility of LGBT young people by providing a space to share stories in an honest and respectful way.

Read the story of Dohyn and learn more here. [via Huffington Post]

Last Tuesday,  Shulamith Firestone—feminist and author of the controversial text Dialect of Sex—was found dead in her New York apartment at the age of 67. In ‘Eulogy for a Sex Radical’, The Atlantic examines Firestone’s ideas on gender, femininity, and sexuality, her impact on the 1970s feminist movement, and the influence of her work on today’s culture.

‘I Don’t Get Along With Lesbians’: An Interview With Camille Paglia

Lesbian author Camille Paglia discusses her work as a literary and social critic, along with a bit of her current sex life, in an interview with the HuffingtonPost.

The Paglia I met in 1997 and saw on TV looked as fierce as it turned out she was. The hair was short. The suit was sharp. The eyebrows arched over eyes that blazed. The red lipstick on the Cupid’s bow of a mouth was a reminder, if you needed it, of danger. And the cheekbones, on a face that seemed to be fixed in a sneer, were almost as sharp as the tongue.

The Paglia I meet today, in a hotel in Mayfair, doesn’t look fierce at all. The hair is longer, and looser. The face is softer, and more lined. There’s no lipstick. There’s no sharp suit. There’s no sign, in fact, of the woman who always seemed to be dressed, and coiffed, and primed, for a fight.

And of course, a congratulations is in order for this year’s winners and runner-ups of the PEN Literary Awards. A ceremony honoring all will be held in New York City on October 23rd.

[Image via We Are the Youth]