Despite its name, Liberty Hall—an event space in the basement of the swanky Ace Hotel (which the Hotel website advertises is ideal for “corporate meetings,” among other things)—seemed like something of a strange location for last night’s reading in support of the three jailed members of Russian feminist punk collective Pussy Riot, whose current trial has captured international attention. Among the Hotel’s typical clientele (who were carrying on business as usual in the bar upstairs) it’s unusual to spot a riot grrrl or radical faerie—but yesterday there were plenty in attendance, when at least 200 feminists, queers, and other artist-activists gathered in Liberty Hall to hear Pussy Riot’s lyrics, poetry, letters, and trial statements read aloud in solidarity.

The evening’s long program featured an impressive list of readers, including Eileen Myles, Justin Vivian Bond, performance artist Karen Finley, musician Johanna Fateman (of Le Tigre fame), and actress Chloë Sevigny. But in a humble and affecting move, there were no introductions for any of the readers, and none, in fact, even said their own name. Instead, without any interludes, Pussy Riot’s words were allowed to speak for themselves.

The reading began with a recitation of the lyrics to “Punk Prayer: Virgin Mary, Put Putin Away,” the song which, in protest of Putin’s re-election, Pussy Riot performed approximately forty seconds of at the altar of the Russian Orthodox Cathedral of Christ the Savior on February 21. It was this action, condemned by critics as an attack on Orthodox Christianity, that led to the March arrests of Pussy Riot members Yekaterina Samutsevich, Maria Alyekhina, and Nadezhda Tolokonnikova on charges on hooliganism motivated by religious hatred—for which, as I write this, Reuters’ breaking news banner has just informed me the Russian court has found them guilty.

But last night I did not hear—and during the past sixth months that these women have been held in pre-trial detention, the world has not heard—anything resembling hatred in their brave and intelligent statements. Though this miscarriage of justice is a human tragedy, I find some small solace that the three women who have been caught in its epicenter are all such articulate and moving writers. In the letters read last night, many of which incorporated Biblical teachings and passages, there were no inflammatory arguments for the case of godlessness, no disrespect. Instead, their words confirmed that far from being an attack on the church, Pussy Riot’s performance of “Punk Prayer” was an attack on a state that corrupts and compromises the faith of its constituents for political purposes.

Throughout the reading (and later last night, lying in bed anxious about today’s verdict), I thought again and again of a line by Muriel Rukeyser—”Whatever can happen to anyone can happen to me”—and of Richard Tayson’s poem after Rukeyser, “Whatever Happens to the Lesbian Happens to Me.” Whatever happens to Pussy Riot happens to me, I thought. To you, too. As their voices are silenced, all voices of the dissenting and disenfranchised are threatened, diminished.

So as Samutsevich, Alyekhina, and Tolokonnikova—along with the rest of the world—await their sentence, let us not forget our own voices. And let us not pretend, as we enjoy overpriced cocktails at the Ace Hotel or support Obama in the election this November, that the corruption of power in Russia is utterly alien to us. The United States, a less exaggerated case to be sure, is nevertheless also a country more secular in name than in practice. Just as in Russia, the rights of the incarcerated are regularly and systematically violated. Though the U.S. State Department issued a vague statement of concern about the “politically motivated prosecution of the Russian opposition and pressure on those who express dissenting views,” President Obama has yet to make any official statement in support of Pussy Riot. As long as he’s on the campaign trail, it’s doubtful he will.

In Ayekhina’s closing statement from the trial (read translations of all three women’s, via n+1), she said:

When I heard Justin Vivian Bond read these words last night, I could not help but notice how accurately they describe not only most Russians, but most Americans. How accurately they describe who I have been, watching the Occupy movement unfold in the past year as a nominally supportive observer but not as a participant. My hope is that the Pussy Riot verdict—an inconceivably terrible error—inspires not just anger, but action and awareness. Let it remind us that we are citizens of the United States and of the world. That means this verdict belongs to us. Let us join together and demonstrate our refusal. 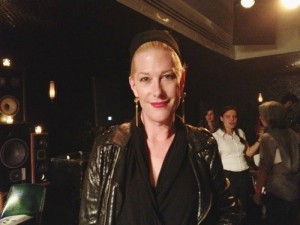 Mx. Justin Bond after the reading (behind, Eileen Myles talks with a reporter)

Today at 10:00am EST, supporters of Pussy Riot will gather outside the Russian Consulate in New York City, with plans to begin a march to Times Square at noon.

Visit The Guardian for live updates on the trial.