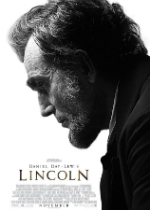 Director Steven Spielberg’s upcoming project Lincoln is a film adaptation of Pulitzer Prize-winning author Doris Kearn Goodwin’s novel Team of Rivals: The Political Genius of Abraham Lincoln (2005). Gay playwright/screenwriter Tony Kushner wrote the screenplay over a period of six years, and the president himself is played by actor Daniel Day-Lewis.

From the publisher, on Goodwin’s novel:

Throughout the turbulent 1850s, each had energetically sought the presidency as the conflict over slavery was leading inexorably to secession and civil war. That Lincoln succeeded, Goodwin demonstrates, was the result of a character that had been forged by experiences that raised him above his more privileged and accomplished rivals…It was this capacity that enabled Lincoln as president to bring his disgruntled opponents together, create the most unusual cabinet in history, and marshal their talents to the task of preserving the Union and winning the war.

The film focuses on the last few years of Lincoln’s life and will be released in theaters this November. Get a closer look of the poster—released today by Dreamwork Studios—and read more about Lincoln here.