‘Sea and Fog’ by Etel Adnan

‘Sea and Fog’ by Etel Adnan 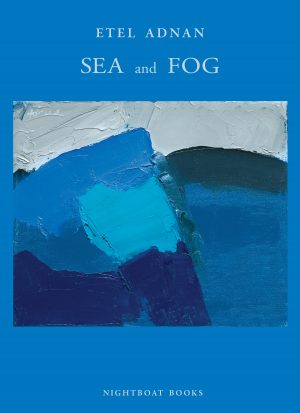 Adnan, a multilingual, multinational writer, grew up in Lebanon before studying philosophy at the Sorbonne, and eventually coming to reside part-time in California. Though born around the same time as the late Adrienne Rich, she fits more closely into a generation of Arab-American writers active in the 1970s and 80s—a generation that explored the intricacies of Arab and Arab American life (Lisa Suhair Majaj, “Arab-American Literature: Origins and Developments”).

Yet Adnan works on the scale of humanity rather than identity. She is a self-identified “universal” citizen whose concerns of life, death, love, loss, violence, and global welfare don’t fit into one specific niche (Suhair Majaj). Such is the beauty and the challenge of Sea and Fog: no narrative through-line exists, and no characters, not even the “I,” seem to hold fixed identities. It offers no clear handholds for a reader to grasp, and yet, each of us knows the truths she tells:

_____Morning. Vast. Imprecision. Fog has covered everything in gray
_____absolute. This has lasted. Doubt looms over the mind. Absence
_____is harder to accept than death.

And the far darker

_____A cosmology of terror: History’s recurrent theme of tortured
_____bodies dumped as garbage…We believe in
_____the uniqueness of these times as in the originality of this sky. The
_____tribe needs to.

Nightboat Press’s description of Sea and Fog as “intergenre,” bearing the tag of “essay” as well as “poetry,” seems particularly apt for a writer who works in verse and prose, and in visual as well as literary arts. In previous collections, Adnan’s artistic endeavors more directly intersected; in The Arab Apocalypse, tiny drawings punctuate the lines. In Sea and Fog, image remains a key element, though it appears in word rather than brushstroke.

Less experimental than previous works, the most fitting term for this collection may be “non-narrative epic,” given the length and scope. At times, the reader may perceive elements of Zen thinking and classical philosophy, with critiques of imperialism and violence, all intermingled with truly lovely writing:

_____Humanity is an ocean, each person a bubble, appearing,
_____disappearing, and reappearing on its turn

_____With suddenness, under an immemorial canopy of shifting
_____clouds, two bodies fuse their heat to create love’s birth.

All these elements of Adnan’s style coalesce into a presentation of what critic Edward Said termed “late style.” The boldness and breadth of Adnan’s lines would fall flat coming from the pen of a younger writer; who but one who has seen most of a lifetime could write “We spend a life-time running after our life, running into the/soft wall, looking for the energy to die”? This elder wisdom in Adnan’s dark visions lead the poem to feel, at times, like another “The Waste Land.” She echoes Eliot’s fear for modern society; Part I, “Sea,” closes with, “It’s scary. The storm is hissing. Waves are brutal. The wind is/whistling and the cold is lonely. Everything is apocalyptic”. This is the vision of an artist who has seen and thought much, and whose concern for the universe of which she counts herself a citizen runs deep.

In counterpoint to the sweeping visions of the two complementary pieces, “Sea” and “Fog,” the most intimate, and perhaps the most emotionally wrought section of the book is the elegy with which it ends, titled “Conversations with My Soul.” We are, after all, preoccupied with our own needs and tragedies, of which relationships often lie at the center. The speaker laments, “Her body will not/return to mine/and I will not return”. At times, her words simply ache:

If no other part of the book resonates for you, this final poem will.

Sea and Fog concerns itself with universal forces, refusing to shy away from the most tragic repeating cycles of human nature: departure, death, war, and love. Hope, in its conventional form, may not be present in these pages, but deep understanding that may lead us there—that, perhaps, we may read into the endless motion of Adnan’s fog-fringed sea.

'The Judy Grahn Reader' edited by Lisa Marie Hogeland
'Let Me Explain You' by Annie Liontas
'Molly: House on Fire' by R.E. Bradshaw

Jocelyn Heath is a MFA candidate in poetry at the University of Maryland, College Park. Her poetry has appeared in Avocet: A Journal of Nature Poems and Poet Lore. In addition to reviewing books for Lambda Literary, she is an intern for Smartish Pace.