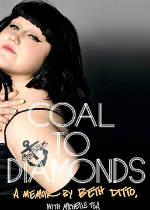 We here at Lambda Literary are all very excited for the upcoming release of queer punk rock superstar Beth Ditto’s memoir: Coals to Diamonds coming this October, published through Spiegel & Grau, and co-written by the incomparable Michelle Tea.

The memoir tells the story of Ditto, from her childhood growing up in rural Arkansas as a “sexually confused choir nerd with a great voice…eighties perm and Kool Aide dye job” to her time spent in Olympia, Washington during the late 1990’s punk scene, where the awesome soul/funk/disco/punk/gospel/rock band, Gossip, was formed.

Her punk education began in high school under the tutelage of a group of teens—her second family—who embraced their outsider status and introduced her to safety-pinned clothing, mail-order tapes, queer and fat-positive zines, and any shred of counterculture they could smuggle into Arkansas. With their help, Beth survived high school, a tragic family scandal, and a mental breakdown, and then she got the hell out of Judsonia. She decamped to Olympia, Washington, a late-1990s paradise for Riot Grrrls and punks, and began to cultivate her glamorous, queer, fat, femme image. On a whim—with longtime friends Nathan, a guitarist and musical savant in a polyester suit, and Kathy, a quiet intellectual turned drummer—she formed the band Gossip. She gave up trying to remake her singing voice into the ethereal wisp she thought it should be and instead embraced its full, soulful potential. Gossip gave her that chance, and the raw power of her voice won her and Gossip the attention they deserved.

Marked with the frankness, humor, and defiance that have made her an international icon, Beth Ditto’s unapologetic, startlingly direct, and poetic memoir is a hypnotic and inspiring account of a woman coming into her own.

To wet your appetite, check out Ditto’s video for “I Wrote the Book,” inspired by Madonna’s “Justify My Love,” and the first single from the Beth Ditto EP album released in 2011:

Starring in My Own Play: A Review of Cecilia Gentili’s Faltas: Letters to Everyone In My Hometown Wh...
'The Sensual World Re-emerges' by Eleanor Lerman
'Jack Be Nimble: The Accidental Education of an Unintentional Director' by Jack O’Brien