‘The Fan Who Knew Too Much: Aretha Franklin, the Rise of the Soap Opera, Children of the Gospel Church, and Other Meditations’ by Anthony Heilbut

‘The Fan Who Knew Too Much: Aretha Franklin, the Rise of the Soap Opera, Children of the Gospel Church, and Other Meditations’ by Anthony Heilbut 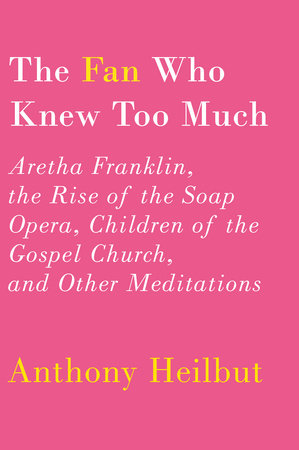 In the late 1950s, Anthony Heilbut, the teenage son of German Jewish immigrants, got an inside view of the underground world of gospel.

He frequented the R&B shows at the Apollo up in Harlem, New York, and was captivated by the energy. At the suggestion of an usher at the storied venue, he also checked out the gospel shows and fell in love with the music.

That passion eventually blossomed into a career as a gospel music producer, and he later worked with titans of the genre, including Mahalia Jackson and Marion Williams. But before he directed those artists and others in the studio, Heilbut befriended several famous and unsung names in gospel, many of them black homosexuals whose artistry shaped gospel’s golden age, roughly between 1945 and 1960. And much of it continues to inform contemporary gospel, especially the flamboyant performance of it, even as the homophobic rhetoric heard in black churches these days has become more hostile and vicious.

Heilbut, a Grammy-winning producer who also holds a Ph.D. in English, explores gospel’s gayness in “The Children and Their Secret Closet,” an elegant and powerful essay in his new collection, The Fan Who Knew Too Much: Aretha Franklin, the Rise of the Soap Opera, Children of the Gospel Church, and Other Meditations (Knopf).

The first part of the book, which consists of two long and gloriously detailed essays on the black church and the career of Queen Aretha, is the most absorbing. Heilbut’s fandom and sharp critical eye allow for an enthusiastic but well-balanced analysis of the world that bore the likes of Dinah Washington, James Cleveland, Alex Bradford and Aretha’s father, the great C.L. Franklin.

Heilbut, who is an atheist, pulls the glove inside out, so to speak, examining the sometimes horrific injustices and personal tragedies that colored the artistry of some of the gospel greats.

The lingo heard in gay circles today (“the children,” for instance, as code for not-so-covertly gay members of the church) derived decades ago from the gospel underground, where drug and sexual abuse, promiscuity, and perhaps mental illness were prevalent. Lots of backstabbing and cut-throat showmanship went down, too, and Heilbut tells it all. Sometimes, his prose can be a bit longwinded and as petty as the church mothers he writes about. But his point about the modern black church’s betrayal of its gay members is searing and valid.

“The church and its gospel music have offered a second home, and often a friendlier place than the homes where boys might face ridicule or worse,” Heilbut writes. But in recent years, with the concurrent rise of HIV infection in the black community and homophobic mega-church personalities like T.D. Jakes and the thunderously hypocritical Eddie Long, “homophobia, always a background rumble, became a deafening cry,” Heilbut writes. And all the while, “the arch-homophobes were singing the music of gay people.”

While delving into the twisted politics and the sad outcomes, Heilbut also highlights the cross-gender impersonation of gospel’s groundbreakers: the way Marion Williams and Ruth Davis imitated the rough, low growls of male gospel singers and how Alex Bradford and Little Richard copied the whoops and trills of Williams and Mahalia Jackson.

Without the immense contributions of black gay men and women, gospel as we have known it for nearly 70 years wouldn’t exist, and its deep and richly nuanced artistry informed one of pop’s most recognized geniuses: Aretha Franklin. Heilbut’s meditation on the enigmatic Queen of Soul is perhaps one of the most insightful studies devoted to her.

Elsewhere in The Fan Who Knew Too Much, Heilbut explores the question of authenticity in the blues (he favors Josh White over Robert Johnson), soap operas, and émigré literature. Heilbut’s fandom, as it were, never gets in the way of clear and piercing analysis of the subjects he’s loved most of his life. Through his passion, he has been able to build a long career. He also has established deep friendships with several who were exploited and abused in a culture they defined. Shining a light on the outcast and downtrodden and telling the truth, Heilbut embodies the gospel he never believed in.

'Mucus in My Pineal Gland' by Juliana Huxtable
'A Queer History of the United States' by Michael Bronski and 'Queer America: A People’s LGBT Histo...
'The Fairoaks Project: Polaroids from a San Francisco Bathhouse' By Frank Melleno

Rashod Ollison is a native of Little Rock, Arkansas and a 2000 graduate of the University of Arkansas, where he studied creative writing and journalism. He has been a staff pop and fine arts critic at the Dallas Morning News, The Philadelphia Inquirer, The Journal News in Westchester, NY, and The Baltimore Sun. He's currently the pop music and entertainment writer at The Virginian-Pilot. Rashod's columns and commentary have appeared in Essence, Jet and on theroot.com and popeater.com. His crate dig music blog, Behind the Groove (www.hamptonroads.com/behindthegroove), placed second in the blogging competition in 2010 national writing competiton at Society of Professional Journalists.