Pithy Posters for the Literary Set

Pithy Posters for the Literary Set 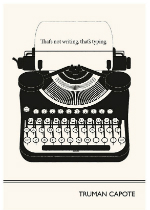 Author and bon mot thrower Truman Capote once said of Jack Kerouac’s writing, “That’s not writing, that’s typing.”  Now you can have that famed witticism–and many more–on a set of cleverly art directed posters. New York-based artist Evan Robertson has created a series of posters inspired by some of the most well-known and turned out literary one liners.

Robertson has created 15 illustrations to go along with literary quotations. There are novelists, poets, a philosopher, quippers and criticizers.

[…]Robertson has done his homework; he describes the literary context of each quote on the sales pages of his Etsy shop, Obvious State. For example, Capote had some specific writing (or was it typing?) in mind: He was criticizing the work of Jack Kerouac. Which gives his quote a little extra edge.

See all the posters by clicking here.