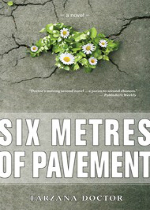 A popular creative writing prompt is to imagine two people who would never speak to each other, trapped in an elevator together. What would they talk about? Would they be able to get along? Divorced transportation engineer Ismail Boxwala and the queer twenty-something Fatima Khan are two such people whose paths would never cross, but their unlikely friendship becomes the linchpin of Farzana Doctor’s second novel, Six Metres of Pavement (Dundurn Press), where love and family become redefined when the characters choose to help each other. And while the dubious pair would be enough to sustain a novel (I was often reminded of Stoner & Spaz, Ron Koertge’s YA novel about a nerd with Cerebral Palsy befriending a promiscuous drug addict), Doctor weaves a cast of characters to accompany them, including Celia, the Portuguese-Canadian widow who folds herself into Ismail and Fatima’s world. It’s a compelling situation which could become clumsy and forced, but is instead a satisfying portrait of urban life with rich attention paid to culture, humor and humanity.

The novel opens with Ismail, who, two decades after his daughter’s tragic death, teeters on the brink of alcoholism with no direction in his otherwise neat life. Moving in a layered narration, sharing both Ismail and Celia’s perspectives of each other on Lochrie Street, we learn more about Celia, recently widowed and orphaned, entrenched in her own depression and living unhappily in her daughter’s home. There’s a struggle for momentum in the story, watching both Ismail and Celia wallow in their respective troubles, until Ismail is encouraged to take a creative writing class, and the dynamic Fatima enters. Whether or not a middle aged engineer and South Asian queer college student would actually strike up the friendship that Ismail and Fatima develop becomes unimportant, as Ismail’s own emotional landscape deepens with each interaction he has with Fatima.

Kicked out of her home and cut off financially after coming out publicly as queer (Doctor does well to illustrate how Fatima acts as ambassador of queerness, patiently schooling Ismail on the fluid properties of gender and sexuality), Fatima enlists Ismail to help as a mediator with her conservative Indian parents. This volatile experience eventually cements his values, and he takes the risk to continue to support Fatima despite pressure from his own family and her family to stop. Parallels between the characters’ experiences are often heavily drawn, such as when Fatima expresses regrets for her actions, triggering Ismail to drift into his own regrets for the mistake which caused his daughter’s death. The plot quickens, however, when Celia finally approaches Ismail after weeks of light flirtation and boldly kisses him, setting off a whirlwind love affair between two unlikely neighbors who may need love the most.

Raising the stakes, Ismail and Celia quickly become surrogate parents for Fatima, who Ismail bravely allows to move into his house. Here is where the heart of the novel resides, watching the three misfits become their own happy family, placing aside assumptions and judgments in favor of love and service. Doctor paints such a positive and charming portrait of their life together, that I found myself wishing the moment had come sooner, and contained the bulk of the story instead of its conclusion. The characters’ emotional journeys are all well plotted: Celia moving through her depression and her agonias, a culturally specific experience both mental and spiritual, and Ismail coming to accept his past and learning to love himself–and others–again. But it’s Fatima who makes the well told love story really shine, with her youth, her faith in Ismail, her commitment to opening other people’s minds (I would happily read more and more dialogue between Fatima and Ismail, as she bandies about queer theory and radical politics, and he moves to question and understand her). By the time we leave the house on Lochrie Street, everyone seems to be just beginning the next chapter of their lives: Ismail with Celia, Celia finding herself post-mourning, and Fatima growing in the loving support of these new adults around her. It’s enough to hope that Doctor would consider a sequel to this tender portrait of strangers finding community in each other. It would be worth the wait.

'Delicious Foods' by James Hannaham
'Under This Beautiful Dome: A Senator, A Journalist, and the Politics of Gay Love in America' by Ter...
'The Laboratory of Love' by Patrick Roscoe