Queer Rites: Where Are All the Old Philadelphia LGBT Heroes?

Queer Rites: Where Are All the Old Philadelphia LGBT Heroes?

What happens to the legacy of lgbt leaders when they are no longer in the spotlight?

I ask this question because on Facebook recently somebody posted a YouTube video of the 1989 Philadelphia Pride march and rally.  I remember arriving at that march somewhat late and attended the events near the LOVE sculpture near City Hall. I wasn’t a speaker or an organizer of the event although I was active in the city then as an author and as an out gay columnist for the Philly weekly alternative newspaper,  The Welcomat.

Throughout much of the 1980s, Philadelphia pride marches were politically-driven in a way that they are not today.  Watching the video of the 1989 march emphasized this fact even more. Nearly all of the speeches at the event touched on the “isms” that were a big source of contention, such as sexism and racism. Pride entertainment in 1989 was mostly folk singing in the style of Joan Baez or political protest songs—entertainment with a message. There were no glitzy comedy routines, no Hollywood divas like Joan Rivers or even Joan Rivers impersonators. Poets recited long poems, and people listened. These were serious times: the AIDS crisis was still fairly new, and Philadelphia politicians, even the so called liberal ones, were lgbt fair weather friends who would frequently desert the community when the going got tough.

In retrospect, of course, it is easy to understand why these early Pride events fixated on ideological “speech” and why show biz and entertainment took a back seat. We had to do things this way because the anti-lgbt voices were so powerful.

Leading the 1989 march was a marching band with a definite military beat. The incessant rat-a-tat of the bugle corps drums suggested a tough unity of spirit and a warlike determination to see things through. The speeches that year were interminably long yet always intelligent, even if sometimes organizers slipped into concepts somewhat outside the specific scope of lgbt rights: economic justice, workers’ rights, and the “sins” of the patriarchy were always commonplace sideline themes.

But people listened; they may have shifted in their seats or yawned, but nobody walked away.

Today’s Pride marches and rallies are much more generalized. There are a few political speeches but the emphasis is mostly on entertainment: drag queens, singers, awards, choruses, and comedians crowd the stage.  Pride events today are much more celebrations of who “we” are as diverse communities than war-like chants reminiscent of Drums Along the Mohawk.

In the1989 video one can find many famous Philly activist faces that in some cases have all but disappeared from the “Who’s Who” rolodex in today’s city of Sisterly and Brotherly Love.

In 1989, Rita Addessa was co chair of the Philadelphia Lesbian and Gay Task Force. For many years, Rita Addessa was the movement. Not only would the news media contact her regarding any lgbt-related political issue, she was an icon throughout much of the 1980s and 1990s. Today most if not all references to her have been shelved into archival oblivion. Although Ms. Addessa is alive and well (I ran into her at the local post recently), and still very much a force to be reckoned with, I don’t see any lgbt organization or news outlets incorporating her into the contemporary canon. There’s been nothing like a guest column, or even a cameo speaking slot at the next June Pride rally. Ideally, one would like to think that some of yesterday’s iconic leaders should be “revisited” from time to time.

Another 1989 video face: the Rev. Joseph Gilbert, a former pastor of Philadelphia’s MCC Church. Rev. Gilbert, who headed Philadelphia MCC for a number of years in the 1980s until he left the city in 1990 for Los Angeles was, like Addessa, quoted and photographed ad nauseam in both the lgbt and mainstream press.  With his white beard (Rev. Gilbert looked like a cross between Karl Marx and Walk Whitman), and passionate dedication to MCC, Rev. Gilbert was sought after by many for advice and counseling. Rev. Gilbert was also the pastor of many MCC churches nationwide, includingPhoenixandProvidence,Rhode Island, and he was also instrumental in the founding of an UFMCC prison ministry. The Rev. Gilbert died inCaliforniain 2006.

Also spotted in the 1989 video was Frank Broderick, editor of Au Courant, a Philadelphia gay and lesbian newspaper (now defunct). Broderick, in his trademark mustache, can be seen scribbling notes near the speaker’s podium. Broderick died of AIDS related causes in 1993.

I’m not suggesting that streets, buildings or rooms be named after former leaders who have died or have taken different paths, only that what appears to be the complete eradication of their memory become, in time… not so complete. 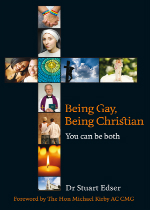 Being Gay, Being Christian

Exisle Publishing (Auckland, New Zealand) has published Being Gay, Being Christian, by Dr. Stuart Edser. The book has been on my desk too long, but I can tell you that it is a handsome product with excellent paper and print quality. Dr. Edser is a Counseling and Health Psychologist in Australia, and has been an evangelical and a Catholic Christian as well as a seminarian in a minor Catholic religious order. Perhaps because of the difficulties he faced in both of these traditions, he helped found an independent charismatic church.

“This book represents my efforts at easing the pain and diminishing the shame of being gay and being Christian,” Dr. Edser writes. ‘….It is written from the point of view of a psychologist who has a long-held deep faith and who has studied to understand the interface between psychology and science with spirituality and theology.”

That’s a lot of ground to cover, and Dr. Edser to his credit, covers it. A sampling of topics ranges from “How many gay people are there?” to “Fraternal birth order,” “The brain,” “Coming out,” “The research of Evelyn Hooker,” “The Bible” and “What the Bible says about Sex.”  The beginning chapters concentrate on the psychology of being gay, and the bible section pretty much covers what other books reviewed in this column have had to say about subjects such as sodomy. Says Dr. Edser: “Ezekiel 16:48-50 describes Sodom’s sin as being arrogant, overfed and unconcerned and not helping the poor and needy. Isaiah 1:10-17 lists Sodom’s sins as sacrifices, burnt offerings, rams, fattened animals, libations of bull’s, lamb’s and goat’s blood, meaningless offerings, incense, various festivals, feasts and congregations.”

And nowhere, of course, does Jesus associate the sin of Sodom with homosexuality. “Jesus associates Sodom…with treating badly the traveler who is telling townsfolk of God’s kingdom being near. He understands that some will repudiate the disciples and he likens these people to the people of Sodom.”

It is a good thing that so many books are being written and published today that re-examine Biblical passages. When I came out in the late 1960s there were no such books, although I do remember the debut of the all-time classic, Is the Homosexual is My Neighbor?, which caught my eye in the Harvard Coop bookstore.  Later, of course, Jesuit John McNeill’s book The Church and the Homosexual would be published, which in turn opened the floodgates for an uncountable stream of lgbt religion-related books

In Patrick S. Cheng’s From Sin to Amazing Grace, Discovering the Queer Christ, (Church Publishing, Morehouse Publishing), Cheng, an Assistant Professor of Historical and Systematic Theology at the Episcopal Divinity School on Cambridge, Massachusetts, urges LGBT Christians to move away from the Western (or Augustinian) concept of sin, or the crime-based model, and adopt the Christ-centered model.

What is this exactly? 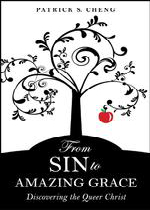 From Sin to Amazing Grace, Discovering the Queer Christ

Consider the Western or “Crime-based model” of sin. “In the case,” Cheng writes, “sin is understood as a violation or transgression of God’s divine law. In the case of criminal law, a crime is understood as an offense against the sovereign or state, and thus justice demands that the offender be punished….Analogously, the punishment of the sinner is also required.”

Adam and Eve then are punished by God for the sin of disobedience, as are all of their descendents. “The infection of original sin is passed on from generation to generation through concupiscence and the sexual act….the inherent evil of the sexual act is rendered non-sinful only by the possibility of procreation within marriage.”

“’In Adam we all die,” Cheng adds, quoting Augustine, “’all human beings are, as it were, one mass of sin owing a debt of punishment to that divine and highest justice.””

In the East, namely in Eastern Orthodox theology, there’s a slightly different understanding of Adam’s sin.

What Cheng calls “the negative effects of the fall are limited under an Eastern Orthodox understanding.” Quoting James Carpenter, a former theological professor, Cheng writes: “’Adam is injured by the fall but he does not fall flat on his face; he stumbles, falters badly, and loses his direction.’ As such, the theology of the East can be understood as a theology of the grace of redemption.”

An early second-century Church theologian of the East, Irenaeus of Lyons, advocated viewing creation as fundamentally good rather than as inherently evil. In Irenaeus’ view, Cheng writes:

In the next column I intend to comment further on Cheng’s book, which provides an in-depth look into theological issues sometimes overlooked in lgbt-related publications.

MB Caschetta: On Her New Novel 'Miracle Girls,' Being an Early Member of ACT UP, and Writing as Rede...
Mykki Blanco Calls on Queer Academics for Inspiration
Publishing Ins and Outs: Advice on Writing for Publication and Getting Published