Michael Cunningham didn’t take the stage right away at the Museum of Modern Art.  This event, billed as a celebration of Diane Arbus, started with a talk by Arbus herself (originally recorded in the 1970s), and a slide-show of her work as well as archival clippings, snapshots and ephemera from her collection.  She discussed her focus on marginal communities, including transvestite prostitutes, nudist colonies, and circus sideshows.  “I always thought of photography as a naughty thing to do,” Arbus said.  “That was one of my favorite things about it, and when I first did it, I felt very perverse.”  Her intention, she explained, wasn’t for the viewer to gawk at these people, but rather to enter their lives.

When Cunningham took the stage with fellow novelist Francine Prose, and Arbus’ daughter, Doon Arbus, the panelists read from Diane Arbus: A Chronology, a compilation of her writings, journals and letters.  Cunningham chose a selection in which Arbus interpreted her own photograph, a portrait of a suburban family, the mother and father in cushioned lawn chairs, soaking up the sun, the father covering his eyes with his hand, and their son, in the background, bent over a kiddie pool in the lawn, seemingly ignored.

“All families are creepy in a way,” he read, connecting the photograph to his own writing:  “We’re all trying to penetrate and respect the mystery of imaginary people.”

For a while, Michael Cunningham was, to me, imaginary.  I had read The Hours and his story, “White Angel,” but Cunningham, as a person, was nebulous, a name on a book, a byline, an author photograph on the flap jacket.  When he came to Houston, where I was studying, to give a reading, I was worried:  what happens when the imaginary person in my head meets the real thing?  Do they cancel each other out, like doppelgangers?  Do they wrestle for supremacy?

I needn’t have worried, of course:  the mental Michael was easily supplanted by Cunningham qua Cunningham.  At the reading, he spoke in a deep, sonorous voice, and afterwards he was affable, even signing a copy of his first, disavowed novel, Golden States.  I wondered:  why do we think we can know who an author is by reading his work?  There’s always—perhaps necessarily—a separation between the author and his work, in the same way that the camera intermediates between the photographer and the photograph.

I got my picture taken with Cunningham.  We stood side-by-side, and my hand is pressed against his chest, as if to ensure he’s real.  Though to someone else looking at the photograph, it may seem as if I’m being naughty.

At his second PEN World Voices Festival event, Cunningham was on-stage with Deborah Eisenberg, Edmund White, and Austrian novelist Daniel Kehlmann to discuss Gregor von Rezzori’s ‘Bukovina Trilogy’:  the novels Memoirs of an Anti-Semite, An Ermine in Czernopol, and the memoir, The Snows of Yesteryear.  After each panelist read a selection from von Rezzori’s work, they expanded upon why they had chosen that passage.

“Reading for relevance,” Eisenberg said, “is a crummy way to read.  What these books do is examine what prejudice and xenophobia are, and how they’re cultivated.  They’re anatomies of the psyche, and they point out what we should be scrutinizing in ourselves.” 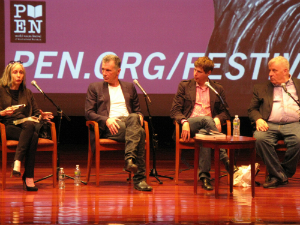 For Cunningham, that scrutiny went further:  “I discovered,” he said, “that Cunningham is an invented name.”  His grandfather, upon immigrating to the United States from Croatia, changed the family name from Grig to Cunningham.  And it was only after reading von Rezzori that Cunningham decided to search for his roots.

After the talk, Cunningham didn’t sit at the signing table with the other authors.  Instead, he snuck into the May sunshine for a cigarette.  I caught up with him there, outside the Museum of Jewish Heritage, smiling and laughing with two young women.  Former students, I assumed.  Maybe current ones.  I brought out some books for him to sign, and he did so, as gracious as ever.

“I should be inside with the others,” he said, taking a drag.  “But I’m being naughty.”  And as Arbus pointed out, maybe that was one of his favorite things about it.

Who Gets to Decide if Sherlock Holmes is Gay, What Happens When LGBTQ Books Go Mainstream, and More ...
Dispatches from Saints & Sinners 2010: Day 3
Donoghue & Cunningham in New York. One Night Only.