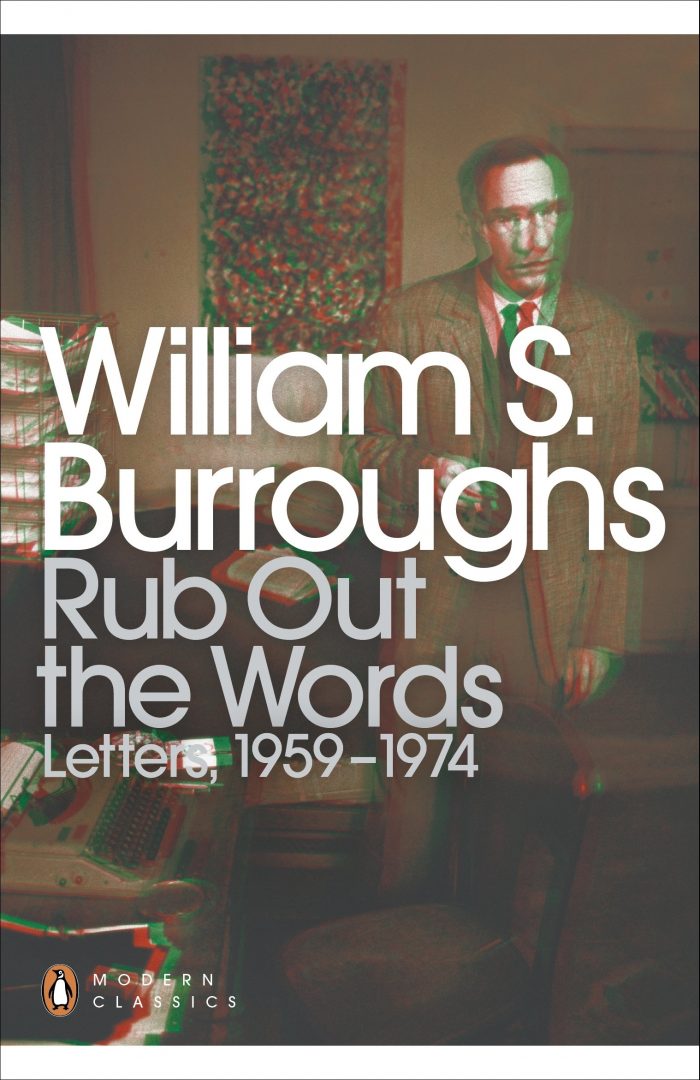 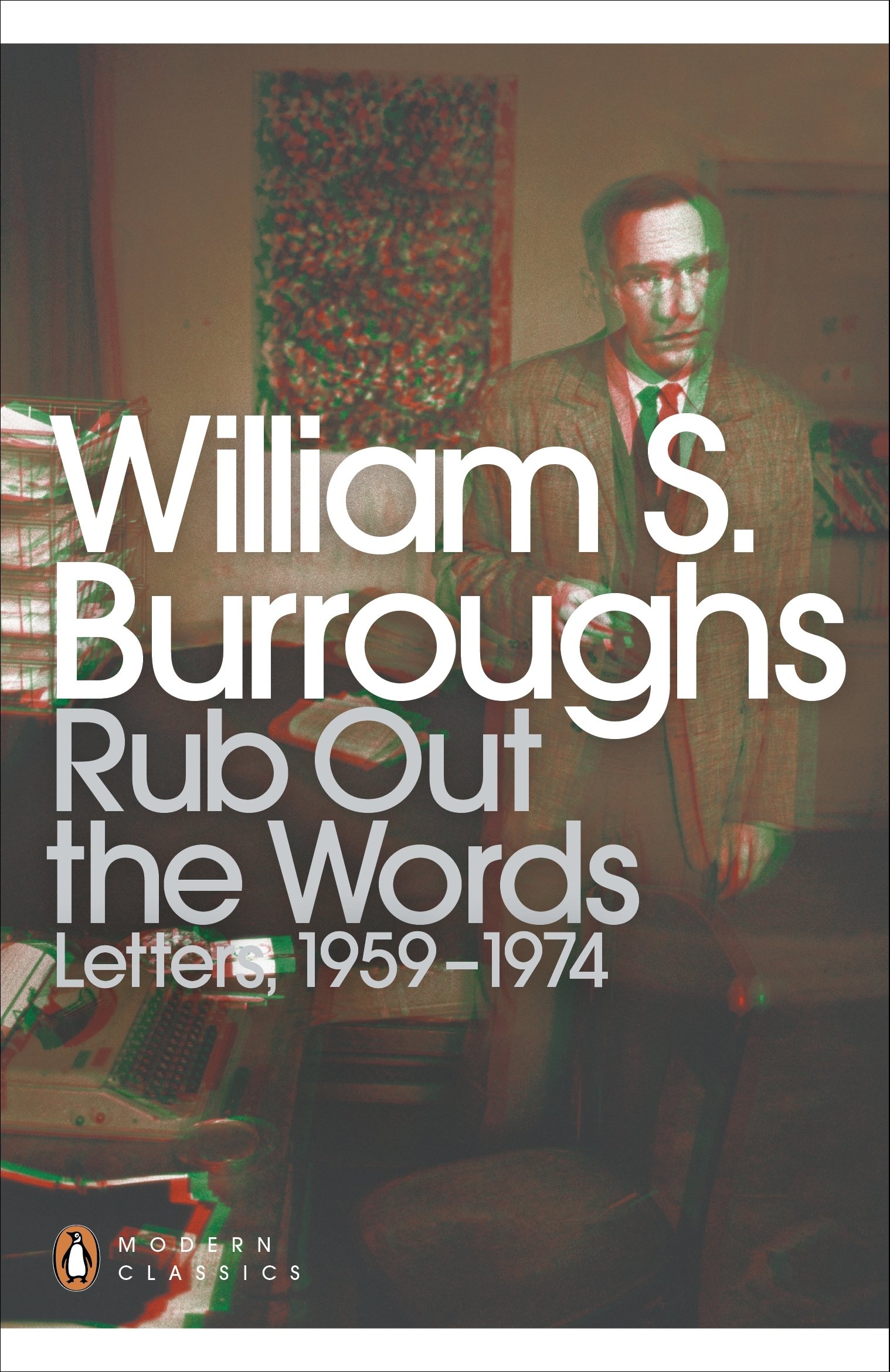 In a 1959 letter to his parents, William S. Burroughs confessed: “I give as much attention to a letter as I do to anything I write, and I work at least six and sometimes sixteen hours a day.” Five years later, he scolded his friend and collaborator, Brion Gysin, for correspondence that left him “confused,” then took “the liberty of quoting from” an article he had written, “The Lost Art of Letter Writing”: “The letters you write are your messengers . . . You a writer? A painter? Any letter you write is or should be your best work . . . ”  In Rub Out the Words: The Letters of William S. Burroughs, 1959-1974, editor Bill Morgan displays some of the author’s best work.

The book begins with Burroughs as a middle-aged self-exile in the midst of a nomadic life in Europe and Northern Africa. He battles money problems, drug addiction (and the stigma of drug addiction), publishers, censorship, Time magazine, and, despite believing devoutly in their teachings at one time, Timothy Leary and L. Ron Hubbard. After experimenting with hallucinogens under Leary at Harvard, he wrote to Ginsberg, in 1961, “I hope to never set eyes on that horse’s ass again. A real wrong number.” Despite these feelings, Burroughs drafted an eloquent statement to accompany his $100 check to the Timothy Leary Defense Fund, established in 1966, after Leary received a thirty-year sentence in Texas for pot possession.

To his friends and associates, Burroughs mainly bitched about money and authority–when he wasn’t expounding upon the brilliance of Brion Gysin’s “cut-ups,” what Burroughs called “collage method,” or the benefits of apomorphine for addiction. To his parents, Burroughs was forever touting his achievements, the prodigal seeking their acceptance, although not as thankful as one might hope for their role in raising his son so he could live the life of an experimental expat.

Burroughs was the kind of father who would write things like, “If you dig The Turn of the Screw you should dig Rimbaud. Nothing obscure in his poetry if you see it as IMAGES,” to his 13-year-old son (and the future author of Speed and Kentucky Ham). Letters from the early 70s advised the junior Burroughs (who by then had his own drug habit) to retain all manuscripts, as well as any correspondence he might have received from his Beat uncles.

“Neal Cassady’s letter to Kerouac brought 7,000 dollars,” he wrote, while in the process of assembling his own manuscripts and correspondence to sell. “A Ginsberg letter is worth about 200 dollars. Have you saved any letters from him? A postcard is 25 dollars.”

However tenuous money was for Burroughs to hang on to, his letters reveal someone who both came from money and believed that an artist’s life should be one of freedom (if not entirely free). In a letter dated April 5, 1963, with his parents caring for his son in Palm Beach, Burroughs said he wasn’t sure whether to stay in London before visiting Paul Bowles in “Tangers,” or maybe go to Greece in between. Then, he added: “I certainly can’t afford living here and I can’t afford to travel. One of the advantages of having money is that it is then easier to save money.”

Of deadbeat publisher, Maurice Girodias, who owed Burroughs thousands of francs in royalties for Naked Lunch, he wrote, without irony: “Some people are self-destructive and want to lose money, it’s a psychological thing. I read about it in Reader’s Digest.”

Burroughs took direct aim at popular culture around March 15, 1966, in a letter to Gysin: “I just skimmed through In Cold Blood, my God what a bore!” But he didn’t take his wounding shot until July 23, 1970 in a scathing personal dismissal addressed to “My Dear Mr. Truman Capote,” a letter that should be required reading for any fan of the poison pen.

After covering the Democratic Convention with Terry Southern, Jean Genet, and Allen Ginsburg, Burroughs took a tour of New York City. His correspondence shows the rumblings of a desire to return. “Another new development here is the complete breakdown of censorship,” he wrote Gysin on September 9, 1968. “There are stores up and down 42nd Street where you can buy pictures of naked boys with hard ons or look at boy peep shows and buy vibrating cocks and transistor batteries.” He repeated his excitement almost verbatim in a letter the following day to film-maker and collaborator, Anthony Balch. During another trip in 1972, he wrote Paul Bowles: “New York has changed beyond recognition . . . Any sex act can now be shown on the public screen with beautiful actors and that’s a powerful sight.”

Such a “powerful sight,” not to mention “a complete breakdown of censorship,” must have been very encouraging to a man whose Naked Lunch caused international censorship battles. So, once the ‘70s rolled around, Burroughs’ heart returned to America, where he took a ride on the Hollywood machine. At one point, he crowed that James Taylor was set to play “William Lee” in the movie of Naked Lunch; at another, he appointed Dennis Hopper. On April 23, 1972, Burroughs wrote that Chuck Barris wanted to use his game show windfall to produce. In that same year, Burroughs developed an apocalyptic science-fiction gender war movie with gay porn director, Fred Halsted, based on Burroughs’ The Wild Boys. Unfortunately, but not surprisingly, neither project was realized.

Burroughs return to the States brought what his letters reveal to be the things he wanted most: money, freedom, and acceptance. And this is where Rub Out The Words ends. The author, now 60, has accepted the stability of a teaching position in New York at a time when our culture–one that he had greatly influenced–finally caught up to him.

In the P.S. to an early letter to his parents, Burroughs wrote: “If my writing seems at times ungrammatical it is not due to carelessness or accident. The English language–the only real adjustable language–is in state of transition.. Transition and the old grammar no longer useful..”

It’s impossible to read Burroughs’ wicked sense of humor, easy, economical, Midwestern style, and desire to mess with words and symbols and not think of the giant, found collage of viral videos, mash-ups, samples, and memes we call the internet. William S. Burroughs would have been a master @ Twitter.