The Banal and the Profane: Max Steele

The Banal and the Profane: Max Steele

“…had a dream that I was in an elevator with a stranger, falling to the ground. I wanted to hold hands with the stranger before we died, but I could tell he didn’t want to, so I just sort of slyly held onto the hem of his jacket.”

This month’s  “Banal and Profane” column comes to us from Max Steele.

I woke up from an anxiety dream about getting my hair cut. About how I’m overdue to get a haircut, which is ridiculous, I just got it cut two weeks ago. Am I overdue? I look fine. I look great. I’ve been trying to meditate for ten minutes every morning, but sometimes the only way to stay awake is to make coffee first and meditate with a cup of coffee steaming next to me. It seems to help. My horoscope says that this week, the important and difficult discussion I’ve been putting off for a month will come to a head. That’ll be something to look to forward to! I make until noon before breaking down and making a hair appointment for this weekend. I feel relieved. After work I run home to shower, drink a glass of red wine, change into fancy black clothes and head back into Manhattan to go to my friend Brad’s Fashion Week presentation. His brand (BCALLA)’s look for Fall/Winter 2012 is “Lazy Hunter” (camo couture, neon orange netting, twinky downtown art star models). The presentation is a madhouse and thrilling. I escape the crowd after drooling over some of the digital neon printed capes, go home to work on a new monologue. We had a house party last weekend and our modem was destroyed, so being without the Internet ought to make me more productive. I get about 20 minutes of writing done before I give in, order Chinese food and watch “Heavenly Creatures” which a friend so highly recommended to me last week. It’s horrifying, and I wonder if this so-called friend knows anything about me, at all. I fall asleep to feverish thoughts of blood-splattered teenage Kate Winslet. Try to console myself by remembering the plot of “Titanic” and realize that I can’t remember anything except her throwing jewelry into the ocean, and doze off thinking what a stupid idea that was.

After work I went to some more fashion presentations, Telfar and Hood by Air. Johnny Sagan organized both shows and runs this town! The clothes at both were great. I found myself exhausted for no good reason. I came home with the intention of going out dancing, but chickened out when it started raining. I can’t be bothered with Tuesdays. I dedicated some serious time to feeling sorry for myself. Bored out of my skull and suddenly depressed. I played the keyboard for a few hours, then the acoustic guitar, then broke a string and took it as a sign. I made a dinner of carrot soup and Xanax, and scowled through the Yohji Yamamoto memoirs, which never ceases to bore me to tears. It should be so much better! Slept and dreamed of being smothered to death by mountains of heavy black fabric.

Late for work because I was listening to that drone metal band Earth and looking up pictures of my ex-boyfriend all morning. This is after  meditating and ostensibly centering myself. I cooked dinner and chatted with my roommates for a bit before going to gym. They were giving out free samples of 5-Hour energy at the gym, which I’m sure was just some kind of promotional thing, but I took it really personally as a present intended just for me. 100% cheered up, I came home and had a productive night of love-letter writing and working on a new story. Trying to find a way to convey the sexual thrill I get from moral ambivalence. I think I can do it. I might need to fuck a stranger this weekend to prove it, though. Or something. I kind of feel like writing or making art is like being a scientist. Hump day treats me well. 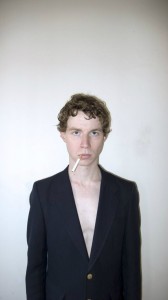 After work I went to therapy to complain about my ambivalence being typically single. Got my poor new shrink to concede that some people are only happy single, and some people in relationships are miserable. I think he was using reverse psychology. I picked up my friend Daniel and we went to the Mattachine party at Julius’. It was the 4th anniversary of that party, and it was typically magical. I don’t go every month, but every time I go I am blown away. They should make an “It Gets Better” video. Like, poor gay boys in the suburbs: don’t kill yourselves. Grow up and come to Mattachine and meet literally every gay celebrity you can think of and feel present and alive in the world. My friends and I spent too much time talking shit about cute boys outside the bar. Eventually I had to beg off and go home early. Started writing a new story about two blind men having sex but quickly abandoned it and gave both of them their sight back. Had a dream that I was in an elevator with a stranger, falling to the ground. I wanted to hold hands with the stranger before we died, but I could tell he didn’t want to, so I just sort of slyly held onto the hem of his jacket.

After work I went to my friend Walter Cessna’s art opening in Brooklyn. It was a group show for WOLFPACK, this queer art gang Walter’s in. His photos were really great, and the party was packed. Nicholas Gorham performed a two-song set, accompanied by Kyle Kupres, and they were just fantastic. Nicholas is like what would happen if Bessie Smith and Laurie Anderson had a baby. I met up with my friends Daniel and Ben and we moseyed from the gallery to Veronica People’s Club, a cute new gay bar in Greenpoint, with a party called Kielbasa was happening. Brad Callahan works at the party and I got to tell him, sloppily, again, how much I enjoyed his presentation. Gio Black Peter came from the gallery too, and we all took deep heavy advantage of the open bar at VPC, where none of us had been before. We ogled the Greenpoint queers. They’re a bit more put-together. Maybe a little fussier. We stopped by the Metropolitan for a minute on our respective ways home, just long enough for me to make a hilarious (I thought) joke about a pack of seemingly-lost eastern European angular-faced models (“Hey,” to my friends, “are you guys into horseback riding?”). The scene was quiet, we soon left for Hana Food to order late-night sandwiches. My favorite part of Friday night.

I woke up early and went to the gym. If I can get through my workout while I’m still hungover, or not yet all the way awake, then it’s like it didn’t even happen, like it was in a dream. I went to Manhattan to go to this Telfar sample sale installation/pop-up shop. Johnny Sagan running the show again, as he does so many new exciting queer art projects in New York these days. We had a nice chitchat about some of these currently super-secret plans. I came home and cooked dinner and had a nap. Met a bunch of friends at Metropolitan, including long-lost pal Kevin, who moved out to LA and hasn’t looked back. He regaled us with tales of the higher quality of living life, and we all got so worked up to live well, that after Kevin decamped a few of us went in search of sexy kids at Sugarland over the protests of our other friends (“Ew, that place is full of teenagers!”) I did end up meeting a very nice guy and we went home together and stayed, I swear, at second base, like good catholic school students. In fact he turned out to be not a teenager at all, but a few years older than me. We were both slightly chagrined to make the discovery that neither of us had bedded a college student, but not disappointed.

I woke up and cleaned my room. Desperate for things to do without the Internet. I went to my long-anticipated haircut at Seagull Salon in the West Village. That neighborhood freaks me out. It’s always been full of weirdoes, but now it’s full of really rich weirdoes, which seems somehow more sinister. I do like the nice boy that cuts my hair, William, and my buddy Craig works there. It’s like a queer punk fantasy of a hair salon. Afterward I met up with my old college chum Marcus at the Cornelia St.cafe. He’s one of my very few Straight Male Friends, and I love him dearly. We had a very nice conversation about analysis and crazy people and laughed a lot. I came home, realizing I was hungover from Sugarland the night before, and ordered Thai food. I watched some bad 1970s action movie (I’m working my way through the Blaxploitation canon) and passed out while reading Colette’s Break of Day.

'Rub Out the Words: The Letters of William S. Burroughs,1959-1974' by William S. Burroughs
'The Tastemaker: Carl Van Vechten and the Birth of Modern America' by Edward White
'Mark Dirt' edited by Nicole Katz, Mathew Swenson, and James Brundage with Ramsey McPhillips