Book Lovers: So You Want to Be a Gay Romance Writer?

Book Lovers: So You Want to Be a Gay Romance Writer?

In Man, Oh Man, Writing M/M for Cash and Kinks (MLR Press, 2008), Josh Lanyon gives a master class in romance writing for writers wanting to break into the M/M romance market.  There is no better guide than Lanyon to writing good romance fiction or simply good fiction, period.  Lanyon’s own highly praised romance fiction encompasses contemporary action/suspense, historical and speculative fiction.  Lanyon’s Adrien English romance mystery series is recognized as a classic and was the winner of the 2006 USA Book News awards for GLBT Fiction.  Lanyon is also an Eppie Award winner and a three-time Lambda Literary Award finalist.  In book after book, Lanyon delivers complex romantic relationships driven by believable protagonists.  No small accomplishment in a genre filled with cookie-cutter men and unbelievable happy ever afters.

But can a writer make a living at it? 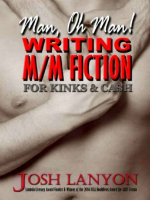 “I do earn a living writing fiction,” Lanyon says, and though successful, Lanyon’s writing schedule is grueling by almost any standard.  “The writing schedule I’ve stuck to for the past four or five years,” Lanyon says is “ten to twelve hour days, seven days a week .  It’s brutal and I don’t recommend it to anyone.”

Lanyon’s advice to aspiring romance writers is, “Take a moment to consider why you want to write. We write for ourselves. We publish for others. I think sometimes people aren’t honest with themselves about what they hope for from a writing career and that leads to frustration and disappointment. We all talk a lot about creative fulfillment and the drive to make sense of the world around us—and I think that’s certainly part of the equation—but sometimes people are also hoping for acclaim and financial reward and a platform. They’re embarrassed to admit they want these things, because they don’t sound particularly noble, but if you can acknowledge what you hope for out of your writing career, it can help you focus on the direction you need to move. It will allow you to accept the restrictions of, for example, writing a commercial story, or the discipline of working with a really good, tough editor.”

“We’re all born with certain aptitudes,” Lanyon says, “and mine happened to be for the written word.”  But Lanyon says, “There’s no such thing as a born writer. Maybe a born storyteller, that I’ll buy, but writing is about craft and style and voice. And you learn your craft through practice and study.”  Lanyon says, “If I hadn’t had years of working with very good editors—working within the confines of mainstream publishing—I wouldn’t be successful now.”

Lanyon believes that the sometimes poor quality of m/m books can be traced to m/m’s literary roots in fan fiction.  Lanyon says, “Fan fiction and therefore m/m fiction found a home in digital publishing long before ‘traditional’ gay fiction.”  Lanyon says that in the past it wasn’t hard “to find an e-publisher or an indie print-on-demand” no matter the quality of the work.  Lanyon believes that the quality of m/m books is improving as the number of new titles increases the competition for e-publishers, resulting in better and better e-books. “Books from credible e-publishers that I think can compete with mainstream offerings,” Lanyon says.  “Now the better e-pubs and indie print pubs all edit for content, they copy edit, they proof read, they invest in decent cover art.”

“Man, Oh Man,” Lanyon writes, “is not an attempt to figure out what m/m literature means for gay letters in general.”  Yet, this m/m writer’s manual serves as a primer for understanding the meaning of m/m romance in gay literature.  Lanyon makes a distinction between m/m romance and gay romance based on the “different historical antecedents, different literary roots” of the twin genres.  “Male/male romance is rooted in fan fiction,” Lanyon writes, whereas “Gay romance as we know it today is rooted in the gay pulps.”  Lanyon believes that the difference between m/m romance and gay romance is that m/m romance takes a “more sentimental and romantic approach to love and sex than you might find in a gay romance novel.”  Lanyon even calls it a “more feminine approach” based on the fact that women writers and readers dominate the genre.  Lanyon says, “Although these two branches of same-sex literature are now permanently entangled, they remain different and often unique strands.”  Paradoxically, Lanyon says, “I believe that all m/m romance is gay fiction. But not all gay fiction is m/m romance.”

The uncomplicated turn-on I get from reading gay erotica written by gay men for gay men feels in some way transgressive when it is a straight woman doing it to me in an m/m romance.  Talk about being gender fucked.  This unease makes for strong opinions about m/m versus gay romance in the gay literary community, with some gay men saying outright that women “can’t” write about gay sex.  Taking a demur approach, Lanyon says, “I never discuss my gender, orientation, sexuality, or anything personal, to be honest.  I know, I know!  That makes for dull interviews!  Which is why I rarely give them.”

In a comment on a previous “Book Lovers” column where I discuss in more detail the m/m versus gay romance controversy, favorite m/m author, Erastes wrote, “Ninety-five percent of my readers’ letters I get are from gay men.  So to say the people who are reading m/m aren’t the same people who are reading gay fiction is frankly silly.”  Classic gay pulp writer, Victor J. Banis added, “Readers don’t give squat whether a man wrote the book, or a woman.  What matters is the story, the book.”  In Man, Oh Man, Lanyon seeks to provide “a writing tool, plain and simple” to assist the writer in accomplishing what really matters—the romance novel itself.

“In romance, conflict equals plot,” Lanyon writes.  In Man Oh Man, Lanyon helps the would-be romance writer to move from the plot hook to a full-bodied novel by discussing essentials like writing a plot outline (“Most newbie writers don’t outline—which is why most first novels don’t get finished”), writing believable characters (“Give him a cat and a mom”), plotting (“Something interesting has to be happening all the time”), dialogue (“Two characters actually communicating with each other”), writing sex scenes (“Go easy on the adjectives and adverbs—some of these scenes read like the rape of a thesaurus”) and editing (“Scan closely for all those add-nothing words”).  Lanyon doesn’t forget the reason for writing in the first place and ends with very practical chapters on getting published and promoting your book (“Storytelling requires that the tale be shared”).

Perhaps the best master class in romance is simply to read Lanyon’s work itself; there is no better example of good romance writing.   Lanyon suggests you start with Fair Game, which is “one of my most successful commercial efforts.”  Lanyon says, “Fair Game,” is a “classic mainstream serial killer thriller except for the fact that the [protagonist] are gay.”  Lanyon said, “‘Snowball in Hell is probably the single work I’m most proud of.  It’s World War II historical mystery, and the research was intense. I lost myself in the writing of it—which rarely happens.”  On the lighter side is Mummy Dearest, the first in Lanyon’s new XOXO Files series.  Lanyon says, “It’s The X-Files meets Scooby-Doo.”  Though lots of fun for the reader, Lanyon says, “There’s nothing harder to write than comedy.”  Another book that’s “just for fun” Lanyon says is “The Ghost Wore Yellow Socks, a classic mystery and romantic suspense. It’s about a spooky old house and a body that keeps disappearing and secret passages and a vulnerable young hero paired up with a tough ex-Navy SEAL.”

I’m a personal fan of Lanyon’s classic Adrien English series because I can’t get enough of LA noir.  Lanyon says, “It was the first gay mystery series to feature a closeted cop as the romantic lead.”  Lanyon says. Fatal Shadows, the first book in the series, has sold about twenty thousand copies.  Closeted LAPD detective, Jake Riordan, is perhaps the classic Lanyon flawed romantic protagonist.  Lanyon says, “I still, first and foremost, consider myself a mystery writer.  I certainly find the characters and their motivations to be the most interesting part of any story—and what greater mystery is there than the human heart?”  The series is “essentially complete now,” Lanyon says, though fans can take heart because, “I expect to write the occasional short story should the spirit move me.” The first two books in the series, Fatal Shadows and A Dangerous Thing have now been combined in an omnibus edition available as an e-book.

Among Lanyon’s own favorites are mystery writers Richard Stevenson and Anthony Bidulka.  Lanyon says, “Scott Sherman  always makes me laugh (not so easy to do) and Pat Brown is, in my opinion, very much under appreciated. But probably the single most amazing book I read in 2011 was not a mystery but a spec fiction serial story from Blind Eye Books, The Rifter by Ginn Hale. I can’t say enough good things about this amazing tale.”  Lanyon also recommends J.H. Trumble’s Don’t Let Me Go.

In a current blog posting at www.joshlanyon.com, Lanyon writes, “I’m slowly moving into self-publishing.”  As the rights to many Lanyon titles come up for renewal with various publishers, Lanyon is taking back the rights.  Lanyon writes, “It’s a financial decision, plain and simple. I don’t want to kill myself trying to make a living at my writing, and I can make more money, and also in some cases keep the cost down for readers, if I eliminate the middleman.”  Lanyon says that the titles will appear on Amazon Kindle, Barnes and Noble Nook, All Romance E-books and Smashwords.  Lanyon writes, “It’s so good to finally have control of the cover art for my work.”  Lanyon looks forward to working with LC Chase and Kanaxa on the cover art for the self-published titles.

“But who am I to argue with the success stories of people like Amanda Hocking
and John Locke ?” Lanyon adds.

“I think all writers, consciously or unconsciously, have to write, are driven by the need to understand and clarify and define—what?” Lanyon asks.  “Their existence? The world around them? I don’t know and there’s a superstitious part of me that thinks if I explore it too closely I’ll stop writing and turn to cloning llamas or something.”

'A Proper Cuppa Tea' by K.G. MacGregor
My Gender is "Predestined": Queer Tabletop Role-playing Games
Kirsty Logan: On Moving Through Grief by Writing, the Art of Worldbuilding, and Her New Novel 'The G...